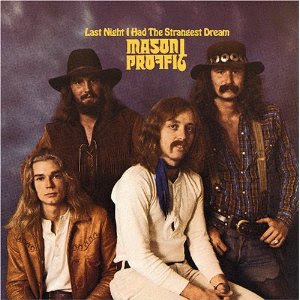 Meet Mason Proffit, none of whom are named "Mason" or "Proffit." They were quite the local favorites when I was in high school in the suburbs of Chicago, and they went on to tour with the likes of The Grateful Dead. But their music never really took off beyond a regional level, at least partly because their first three albums (including the 1971 gem pictured on the left) were released only on Chicago labels.

Can you guess what type of music they played? Yes, Bubba and Windsong, that's right, hippie-laced country/stoner rock. It was the best of both worlds, a non-redneck confluence of twang and sweet harmonies. I liked them a lot, better than your Eagles and Pocos and various other country-ish outfits that sold a lot more records at the time. I'm thinking about writing about them in Paste, because nobody knows them these days, and that's a shame. Their music is well worth tracking down.

Actually, if you're a longtime fan of Christian music, you might know them after a fashion. That bearded, hatted fellow on the left is John(ny) Talbot, who, as a Franciscan monk, has had a worthy career as a purveyor of contemplative folk hymns. He has called himself John Michael Talbot for several decades now. His brother Terry, hatted and heavily mustachioed on the right, had a few fine solo albums as well.

But I like them best in their Mason Proffit incarnation. It's the sibling harmonies. Along with the Everlys and the Louvins, these guys were the best.
Posted by Andy Whitman at 3:52 PM

I wish I could have heard them live as a band, but even solo they were really good. Especially when they joined each other on stage and dueted all over again. Love the MP albums...

Fun trivia: Did you know that Tim Ayres and Mark Walker of Mason Proffit did play bass and drums on the late Larry Norman's masterpiece In Another Land (which, by the way, was engineered by Andy Johns of Led Zeppelin's IV and The Rolling Stones' Exile on Main Street fame). As well, Terry Talbot played acoustic guitar on "I Love You", which should have been a mega hit on the radio. And, of course, "Six, Sixty, Six" featured a brilliant icing-on-the-cake-banjo by John Michael Talbot. (Earl Scruggs once called Talbot "the best banjo player I've ever heard.") Today Talbot is considered to be the most-selling contemporary Catholic musician of all times (at least, that's what I've heard). It's a strange world....

PS
And, let's not forget about the Talbot brothers' solo release The Talbot Bros. on the Warner Brothers label (later re-issued by CCM corp Sparrow Records as Reborn, minus one track...say no more).

In my foggy memory, I think I first heard John Michael when I visited Eastern Mennonite College back in the fall of 1975. He wore a white robe and had a long beard and talked in apocalyptic terms, if I remember right? Later my sister shared his Come Worship the Lord tape, and it was great. I liked To the Bride, too. Interesting life.

Sorry, that's For the Bride.