Hipsters Through the Ages 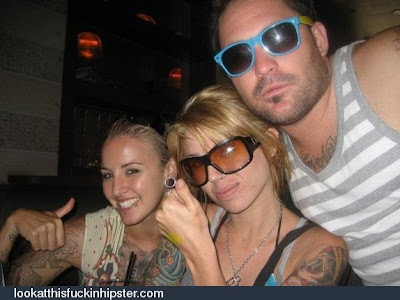 Photo courtesy of lookatthisfuckinhipster.com.
The hipster discussion continues over at Arts & Faith (link above and to the right, if you're interested in following along). Lately the conversation has turned to the role of advertising/marketing in creating hipster culture, both inside and outside the Church. It's a worthwhile discussion, and you might like it.
For what it's worth, although I think manufactured rebellion is part of the equation, I'm not sure it's the most important consideration in understanding hipsters or hipster churches. What about good, old-fashioned aesthetic excellence? How does that factor in?

As one who is now witnessing his second generation of Christian hipsters (we called the first wave "Jesus Freaks"), I see a lot of the same patterns at work that I saw in the '70s. On a superficial level, the Jesus Freaks were all about rebellion; rebellion against staid, traditional church models and all the trappings those models entailed. But they created their own conformity just the same, and fairly quickly at that, as evidenced by the early CCM heroes, the "hip" Christian authors they followed at the time (Francis Schaeffer, Ron Sider), and the fashions they wore (peasant dresses for the sisters, flannel shirts for the bros, with matching hair down to the middle of the back). It is always this way. The hip becomes unhip all too quickly. And the next wave reacts to the unhipness.

As a proud former hipster still desperately clinging to the vestiges of cool (I'm kidding. Right?), I hated the conformity, even in the Jesus Freak '70s. I worked at a Christian bookstore for several of those years, and I would try not to wince whenever somebody brought a Honeytree album or a Hannah Hurnard book to the cash register. What I would say was, "That'll be $5.99." But what I wanted to say was, "Good sister, why do you support that which sucks? Praise God.{1}" Looking back on it, this reaction had little to do with what was hip/cool (God forbid that Hannah Hurnard should ever be considered cool, but, in fact, she was for a short, deluded time), and a lot more to do with perceived artistic excellence. I saw a lot of kitsch in the traditional Church. I saw a lot of kitsch in Jesus Freakdom, even though it was marketed under the rubric of countercultural non-conformity. And I didn't like any of it.

There are some crucial differences in this new generation of Christian hipsters. They have, for the most part, rejected the idea of an alternative Christian culture. I don't know anyone in my current church who gives a rip about CCM, although most of them are huge music fans. They tend be more holistic human beings than the Jesus Freaks, and place much less emphais on "soul winning" and a lot more emphasis on caring for the planet and for the people who live on it. They are far more focused on issues and local activism and far less inclined to believe that solutions can come from elected officials. They are highly attuned to emotional and spiritual manipulation, and they are deeply distrustful of major media figures everywhere unless they are named Bono. They have a healthy understanding of and appreciation for irony, a talent that for many years I believed was supernaturally removed upon Christian conversion. In general, I think these are positive changes. I sometimes fear for their ability to earn a living, but that's not really a fear limited to hipsters these days. They care passionately about art, which makes me extremely happy. Some of what defines them is the usual reaction to what has come before, and a desire to claim their own heroes. But the tendency isn't nearly as pronounced as it used to be. I'm not sure what kind of cultural "rebellion" is going on when some hip twentysomething claims to love Frank Sinatra, Jimi Hendrix, and Animal Collective, but I'll take it. And that makes me think that the non-conformity angle has been overplayed.

[1} In this same store I tried to convince the owner that George Thorogood's "Bad to the Bone" was a commentary on total depravity, and that his Calvinist customers would love it. He didn't buy it.
Posted by Andy Whitman at 2:08 PM