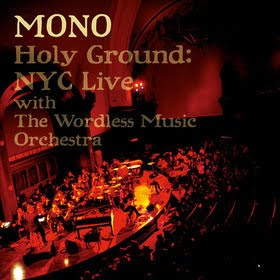 Nothing against Jonsi and Sigur Ros, but I'll take the portentous bombast of his band's early music any rainbow-filled day over the twee flutterings and cooings of his current solo album. Sigur Ros' influence over the post-rock landscape is incalculable, and during the past decade a host of celestial warriors has stormed the heavenly gates, with mixed results. The basic post-rock formula -- the pensive, glacially slow buildup to a pounding, roaring catharsis -- is now something of a cliche, and it's hard to imagine any band achieving an artistic breakthrough given the tired trappings of the framework. And that makes the Japanese post-rockers Mono, and their new album Holy Ground: NYC Live, such a surprising and welcome triumph.

For seven albums Mono has consistently delivered cinematic post rock, minus the Hopelandic whalesong. They do it again here, but with a nicely nuanced twist. The 24-member Wordless Music Orchestra contributes beautifully shaded chamber music accompaniment to the sturm and drang, and that means that these long, long songs -- most of them in the 12 to 15 minute range -- are just as captivating during the glacial buildups as they are during the big, cathartic payoffs. The 9 live tracks, spanning 80 minutes, are primarily taken from the band's great 2008 studio album Hymn to the Immortal Wind, but there are a couple surprising choices as well, including two from the band's 2004 collaborative re-mix album New York Soundtracks. The classical/post-rock hybrid is such an obviously fitting stylistic marriage that it's surprising that it hasn't been tried more frequently. Sigur Ros, with their collaborations with string quartet Amiina, have beautifully explored the quiet side of the equation. But Holy Ground takes in the full sonic gamut, and the results are everything one could hope for -- brooding, serene, explosively powerful, and never less than lovely.
Posted by Andy Whitman at 9:06 AM

Great review - I loved Hymn to the Immortal Wind, so I will probably pick this up and blast it (much to my wife's chagrin).

Interesting blog, ... I found your profile description entertaining, since I'm just a bit younger, but also have that wife of indeterminate age(so she thinks), a son finishing college this year, and am a total heavy metal-head disguised as suburban dad.