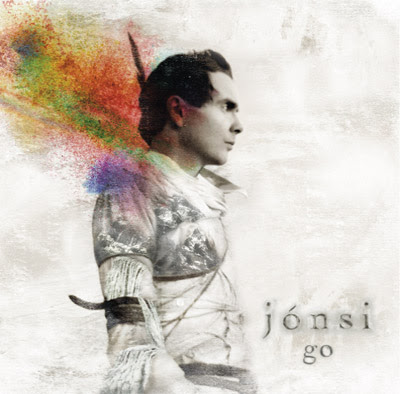 The cover pretty much tells the story. The Sigur Ros frontman emerges as Luna Moth on his solo debut Go, wings aflutter and gilt by rainbow colors. All that's missing is the unicorn.

My reaction is decidedly mixed. The more pop-oriented direction, first heard on 2008's Med Sud I Eyrum Vid Spilum Endalaust, is more than a little disconcerting. I actually love those 12-minute glacial buildups, and I miss them. Even more problematic for me is that Jonsi, in his new hit-making incarnation, now sounds uncannily like Jon Anderson from Yes. And the English lyrics really aren't that far removed from "In and around the lake/Mountains come out of the sky and they stand there/Twenty four before my love you'll see I'll be there with you." I like "Eeeee Siiiiiigh Ooooooh" a lot better because it never pretended to mean anything.

That said, there are some wonderful musical moments here. Nico Muhly's orchestral arrangements are spectacular. The jackhammer percussion, the strings and horns, and that unearthly choirboy tenor really are thrilling when they coalesce. I think I really like and really dislike this album. In any case, it's a letdown for me from ( ), which is still unpronounceably great.
Posted by Andy Whitman at 9:10 AM

I've never heard his music before. :/