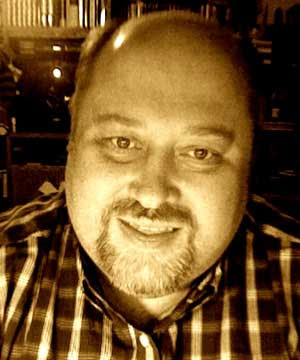 It was with great sadness that I read that Michael Spencer, The Internet Monk, died yesterday.

Michael was a pastor, a father, a friend to many. But like many others in this digital age, I knew Michael primarily from his words that appeared on my computer monitor. His blog, The Internet Monk, was a constant source of enlightenment, humor, civility, and thoughtful challenge.

Michael was an uneasy but faithful Christian who loved Jesus, and who simultaneously loved and was exasperated by the Church. Surely there is much with which to be exasperated, and Michael unfailingly chronicled its foibles. But he did so not out of judgment, or out of an outraged sense of injury, but out of concern. His words, and the dialogues he shepherded on his blog, were a source of light and love in the murky and frequently distasteful world of Internet intercourse.

I only met Michael once, and briefly at that, a couple years ago in the house trailer that housed the speakers at the Cornerstone Festival. We had a five-minute conversation, during which he was warm, opinionated, affable, and incisive. I suspect he was, in real life, much the same as he appeared in print.

But I don't know. I do know that he leaves a void, and that in an Internet universe where religious dialogue is little more than shrill sloganeering, he was the real thinking deal, and a credit to the Christian faith. I also know that he leaves a grieving wife and children. He was only 53 years old, and cancer, fucking cancer, got him. Please pray for his family.
Posted by Andy Whitman at 8:21 AM

I am so sorry to hear this. I knew he was very ill. He does leave a void. He was always walking the line between. God be with his family.