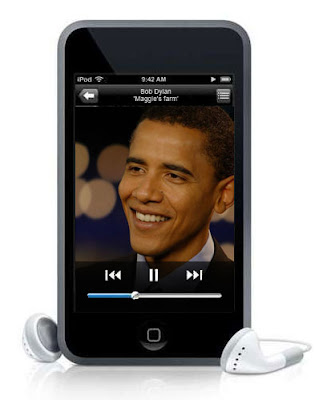 I surveyed my iPod to put together a playlist of, for lack of a better term, my favorite songs of the past forty years. I ended up with 50, a nice round number.

Why forty years? Because that pushes us back to 1970, intentionally skipping the '60s. We've all watched the VH1 Greatest Songs countdowns, and read the canonical Rolling Stone History of Rock. And I, for one, am tired of seeing lists dominated by The Beatles, The Rolling Stones, Jimi Hendrix, and Bob Dylan. Don't get me wrong. I love those folks. But the 1970 barrier forces us to pass by most of the acknowledged classics.
A couple other caveats:
-- I focused on "pop" and "rock." I don't have any jazz, blues, country, or hip-hop here, and there's precious little soul. A broader list would certainly include those genres, but the list was tough enough for me to compile as it was.
-- It's a pretty white list, and it's a list dominated by Americans and Brits. This leaves me wide open to the charge of Good Ol' Boy Chauvinism. I don't know precisely why that is. If I had ventured back to the fifties and sixties, there would have been a more representative sample of African American greats. And certainly if I had included jazz and blues it would have been more diverse. But as it is, it's a singer/songwriter list, with a smattering of punks and guitar slingers. To rectify the situation somewhat, the graphic at the upper left includes a picture of Barack Obama and a Bob Dylan song featuring a woman's name.
-- The '80's were not the greatest musical decade for me. That's just the way it is.
But here's what I ended up with. How about you?
1970s
Tired of Being Alone – Al Green
Every Picture Tells a Story – Rod Stewart
Percy’s Song – Fairport Convention
Baby Blue – Badfinger
The Last Time I Saw Richard – Joni Mitchell
Listen to the Lion – Van Morrison
September Gurls – Big Star
The Return of the Grievous Angel – Gram Parsons/Emmylou Harris
Farther On – Jackson Browne
Place to Be – Nick Drake
Cortez the Killer – Neil Young
Thunder Road – Bruce Springsteen
God Save the Queen – The Sex Pistols
Blitzkrieg Bop – The Ramones
Heroes – David Bowie
Deacon Blues – Steely Dan
This Year’s Girl – Elvis Costello
Teenage Kicks – The Undertones
1980s
What I Like About You – The Romantics
Gloria – U2
A Million Miles Away -- The Plimsouls
April Fool’s Day Morn – Loudon Wainwright III
Streets of Sorrow/Birmingham Six – The Pogues
Bastards of the Young – The Replacements
1990s
There She Goes – The La’s
I Believe In You – Talk Talk
Chickamauga – Uncle Tupelo
Fake Plastic Trees – Radiohead
Echoes Myron – Guided By Voices
1952 Vincent Black Lightning – Richard Thompson
The Mercy Seat – Nick Cave
The Lakes of Canada – The Innocence Mission
Star Sign – Teenage Fanclub
Moses – Patty Griffin
I Can’t Remember – Vigilantes of Love
Tired of Sex – Weezer
Fort Worth Blues – Steve Earle
Windfall – Son Volt
Holland, 1945 – Neutral Milk Hotel
2000s
Don’t Let Me Go – Michael Penn
Fell In Love With a Girl – The White Stripes
One Great City! – The Weakerthans
Hate to Say I Told You So – The Hives
Casimir Pulaski Day – Sufjan Stevens
Richard Pryor Addresses a Tearful Nation – Joe Henry
Glenn Tipton – Sun Kil Moon
Hey Ya – Outkast
Glosoli – Sigur Ros
Stuck Between Stations – The Hold Steady
Posted by Andy Whitman at 1:09 PM

I'm so glad you did this...although I don't know HOW you did it. I've wanted to ask you ever since we reconnected to recommend some CD's and artist that you think I might like...but then I though you might get that a lot from people. So...now I have a starting point for artists...especially for the 2000's. I'm afraid I'm a bit stuck.

Whew. "Stuck Between Stations" made it.

That is some fantastic list. So many great, great songs to choose from, yet you picked some bits of perfection.

Enjoyed reading that one.

Cindy, I'll make a couple sampler/mix CDs for you of music from the 2000s. They should be ready for delivery when you and Craig visit in a few weeks. I'll mix it up genre-wise, thereby guaranteeing that you'll loathe some of it and like some of it. But maybe that will provide some ideas for future exploration.

Just read it and haven't fully digested it, but two that I would have included are Death or Glory by the Clash and Crazy by Gnarls Barkley, but I don't think you and your list suck.

No Wishbone Ash from the '70s?

This is madness, Andy. It's a great list, but the making of such lists is madness. Therefore I will join in.

I haven't heard maybe half of the songs you list. Of those you do list, I'd sometimes sooner choose a different song from the same album: for instance, I'd pick "The Predatory Wasp of the Palisades" over "Casimir Pulaski Day". My favourite Hold Steady song is "Cattle and the Creeping Things".

Some other songs I'd choose: "Wilderness", by Peter Case; "Avalon of the Heart", by Van Morrison.

Wait, Penn's "Don't Let Me Go" is the best song by MP in this millennium? I don't think it's the best song on that album (that would be "Bucket Brigade"). I'm not denying that it is a great song but there are also several better songs on *Mr. Hollywood Jr., 1947.*

Still, I admire and appreciate your cajones in publishing such a list. You knew you'd hear complaints from the peanut gallery.

I got into a debate about the 80's with a couple of folks and when I was finished, I realized it wasn't a complete waste of a decade music wise. Had U2, Elvis Costello, T-Bone Burnett, Midnight Oil, The Call, Smithereens, Maria Mckee/Lone Justice, Tom Waits, 10,000 Maniacs, Tracy Chapman, Bodeans, Guadalcanal Diary, Replacements, Tonio K., Police just to name a couple. Just throwing them out there but out of your list, I am only missing two...

I love seeing "The Lakes of Canada" on this list. The Innocence Mission is one of my favorite secrets in music these days. It is rare that I find people who have heard of them, and their songs are so unique, simple, and striking.

You've got a great blog here.