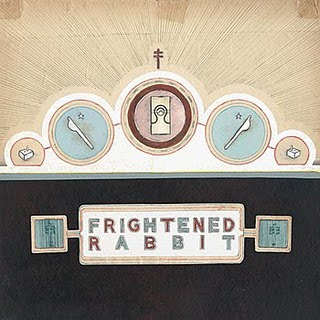 It's been a year and a half since the band with the silly name of Frightened Rabbit made a serious dent in my musical sensibilities. Now it's time for the dreaded followup to the breakthrough album.

My initial reaction was and is disappointment. Not because The Winter of Mixed Drinks is a bad record. It's not. But The Midnight Organ Fight was such a rare album, simultaneously raw and soaring, that I suspect any followup would be disappointing for me.

There are many praiseworthy elements. I think Scott Hutchison is the most captivating, passionate rock vocalist since the early Bono. The hooks just won't quit, the lyrics remain quirky and non-cliched (for the most part), and there's a huge, anthemic sound here that clearly wants to reach the back of very large arenas. The negatives? It's unfocused. It's a collection of pop/rock tunes. There's nothing wrong with that, but TMOF had such a compelling forward momentum, highlighted by the worst of breakups, suicidal self-loathing, and, finally, a resolution to carry on in the midst of the shite, that it felt both exhausting and exhiliarating. This one? Nice songs. Most significantly, the production bothers me. A lot. I'll probably get used to it. But I think I've gone on record a few times in noting that I'm not a fan of Lanois/Eno production, and this sounds like The Joshua Tree Grows in Glasgow.

I love this band. There is every indication that this is the album that will break them big, and they deserve it. It's huge in every way. And, as I did when I first heard U2's War and realized that the rock 'n roll landscape was about to be permanently altered, there is a part of me that is a bit saddened. Call it the Inevitable Wow Factor, and call it slightly diminished returns.
Posted by Andy Whitman at 10:47 AM