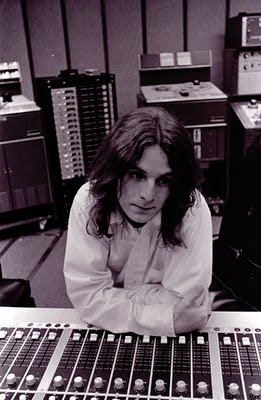 Like 99.999999% of the world, I paid no attention to Big Star when they were actually a recording and touring band. I recall seeing #1 Record in a music store when it was released. It was Big Star's s debut album, and my first exposure to the band, and I remember being vaguely amused by the audacity of a bunch of unknown musicians who would dare to call themselves Big Star and name an album #1 Record. But that was the extent of my interest. I certainly wasn't going to buy it. Who the hell had ever heard of Big Star?
And that was the way it went. Nobody bought the three albums the band released. The band broke up. Chris Bell, who may have been Alex Chilton's equal as a songwriter (and that's really saying something) died young and tragically in an auto accident. Nobody knew who Alex Chilton was except perhaps a few rabid music fans who remembered his soulful vocals as a teenager in The Boxtops.
I'm fairly sure it was Michael Stipe who brought the band to my attention. Somewhere in the early '80s, in the flush of those first few, great R.E.M. albums, I recall reading Stipe's admiring comments about Alex Chilton and Big Star. Since, at the time, I thought R.E.M. could no wrong, I tracked down vinyl copies of the three Big Star albums. They were, and are, enigmatic and marvelous. There were great songs there, for sure. But it was weird to hear these Memphis kids with their blatant Anglophilia. It was as if The Beatles had landed in the cotton fields. The first album was a pristine but derivative homage to Beatlemania. The second album was sloppy and loud, and utterly compelling and melodically brilliant. And the third album was just a dissolute, despairing mess. It was hard to believe that all three albums came from the same band.
But that was Alex Chilton. He was a superb pop craftsman who didn't give a flying fuck most of the time. He conveyed an air of cynical nonchalance: in the studio, on stage, in real life. And he wrote songs of such incredible depth and self-loathing that they could break your heart. He frittered away most of the good years, and I love him dearly. And now he, too, is gone too soon. Rolling Stone Magazine put all three of the Big Star albums -- and there were only three, as far as I was concerned, although later and inferior incarnations of the band put out a few others -- in their list of the 500 greatest albums of all time. They were right. As Paul Westerburg of The Replacements sang, "Children by the million sing for Alex Chilton." As usual, he exaggerated. Even in their belated renaissance, Big Star were never more than a cult favorite. But he still got it right in spirit. The tens of thousands who finally paid attention, far too late, know that Alex Chilton was one of the greats. I'll miss him, and this is a sad day.
Posted by Andy Whitman at 8:53 AM

>Since, at the time, I thought R.E.M. could no wrong

Boy, were we fooled!