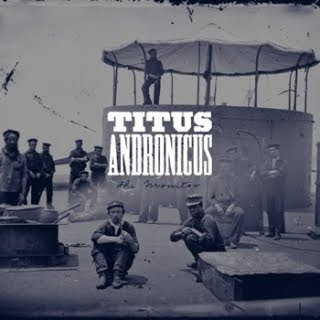 I have a friend who is convinced that rebellious youth, as a cultural demographic group, didn’t really exist until the rise of relatively contemporary media such as film and television. And rock ‘n roll, of course. We can’t forget rock ‘n roll. According to this theory, kids were by and large docile, compliant creatures until they reached adulthood, at which point they assumed their rightful place as productive members of society. It all went to hell in the fifties and sixties. Then, under the influence of the powerful and pernicious media, kids were conditioned to believe that their elders were malevolent beings whose primary goal was to tame their nascent individualism and squeeze the life out of them. The only recourse, if you were a kid, was rebellion, escape, the desperate but noble pursuit of freedom. Hence free sex, Woodstock, drug abuse, Marilyn Manson, Columbine, etc. It’s been a steep downhill descent.

He may be crazy. But he certainly wouldn’t like New Jersey punks Titus Andronicus or their latest album The Monitor. This is “Born to Run” and “God Save the Queen” more than thirty years down the line, and if it’s steeped in the knowledge that there may not be anywhere to run, and that “no future” may be more true than ever, it’s nevertheless one continuous, noisy, contentious argument for the necessity of youthful rebellion. Or, as lead singer/songwriter Patrick Stickles sings, multiple times on multiple songs throughout this very long album, “The enemy is everywhere.” Be ever vigilant, wary youth.

There’s an ostensible American Civil War thread running through the mess. Good luck trying to follow it. The album title refers to the Yankee ironclad ship that defeated the Confederate behemoth The Merrimack in the Battle of Hampton Roads, which also happens to be the title of the epic punk closer on the album. There are songs called “A More Perfect Union” and “Four Score and Seven,” titles that reference Lincoln’s Gettysburg Address. In between we get spoken-word pieces quoting Abraham Lincoln and Walt Whitman. All well and good, and even consistent with the theme. But then we get a song called “Richard II,” who was, if my memory serves, hunching around Merrye Old England almost 500 years before the first shot was fired at Fort Sumter. Then we have a song that namechecks Bruce Springsteen. And another one called “Theme from Cheers,” as in the TV sitcom, not what the brave men in blue and grey might have said to one another as they hoisted their tankards on the night before battle.

In other words, as concept albums go, this one is shot to hell even without the many references to warfare. It doesn’t really matter. Stickles is pissed off about everything – his lousy life, the poisonous state of New Jersey, the broken promises of his elders, the American Dream that has degenerated into the American nightmare – and he howls his debauched tales in much the same manner as Paul Westerburg and Joe Strummer did, elderly rebels before him. His band sounds well lubricated, loud, sloppy, and defiant, and these songs – most of which stretch beyond the seven minute mark, and one of which extends beyond the fourteen minute mark – set out to be nothing less than the definitive Anthems of Disaffected Youth. To say that they are overblown and indulgent largely misses the point. Of course they’re overblown and indulgent. But they pack a wallop, both lyrically and sonically, and they seethe with righteous indignation:

This is a war we can't win
After 10,000 years, it's still us against them
And my heroes have always died at the end
So who's going to account for these sins?

And I don't know who here is my friend
Well, I'm certain that I've seen only men
Christ, fuck me if I can remember when
Will I never be lonely again?

"We're all depraved and disgusting" I spew like a fountain,"
And debased, defaced, disgraced and destroyed,
"Most of all disappointed" I say atop this mountain
As I urinate into the void

Fuck, I'm frustrated, freaking out something fierce
Would you help me, I'm hungry, I suffer and I starve
Oh I struggle and I stammer 'til I'm up to my ears
In miserable quote unquote art.

It's still us against them
And they're winning

I don’t know. I’m thinking my friend is still wrong. Along with Patrick Stickles, I’m thinking that the bastards are still out there in force, and that there still may be one or two things worth rebelling against. I hope it goes without saying that this is one fantastic album; deeply flawed and utterly compelling, raw and poetic, tender and desperate, yet another reminder of why the kids still need to get out while they’re young. You go, kid.
Posted by Andy Whitman at 1:03 PM