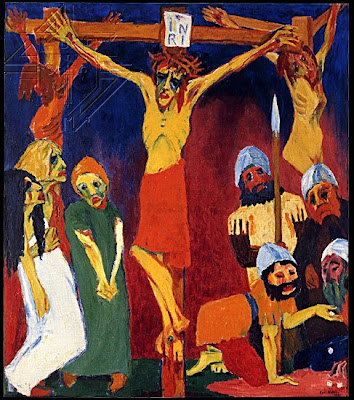 It's been a restless day in a restless week. I'm having trouble praying, mainly because I want to scream. Perhaps the presence of Stage 4 cancer in people you love does that to you. I don't know. I've also been listening to a wondrous album called Elephants by Aaron Strumpel. There is a song there, a setting of Psalm 137, called "In Babylon." "In Babylon, I put down my harp," Aaron sings, "In Babylon I forgot who I was." Then somebody shrieks for about two minutes. I think that shriek is about the most holy thing I've heard in a long time.

This is something I wrote a long time ago. I don't have the energy to write much today. But I still believe this, and it still captures what this day is all about.

In a bizarre twist on the Hitchhiker’s Guide to the Galaxy, thirty-nine people in San Diego, members of the Heaven’s Gate cult, committed mass suicide, hoping to catch an eternal ride on a UFO trailing in the wake of Comet Hale-Bopp. I heard about it for the first time this evening as I was driving home from work. This was apparently an express, non-stop USO, and the cult members had to time the suicide to coincide with the UFO’s closest appearance to Earth. When eternity comes near, you have to make yourself available. Otherwise, you find yourself left behind, stranded on this rock with a hunger in your gut and no way to fill it.

Tonight at church we tried to latch on to eternity. Fifty of us huddled together in the first four or five rows of pews in a darkened sanctuary and listened to the Passion of the Christ, and sang a few hymns, and ate the flesh and drank the blood of the Son of God. On Sunday the church will be festooned with lilies, and the lights will shine brightly and the sanctuary will be packed with C&E Christians putting in their semi-annual appearance. But tonight we met in the darkness, just a few of us, and tried to see.

I didn’t want to be there. I was tired, and it was a hellish day at work, and I skipped dinner so I could make it in time. I yelled at Emily, who complained about going, and told her that I didn’t feel like going either, damn it, but that we were going because it was important for us to go. Now there’s a wonderful message to communicate. Pious Father Screams at Kids, Then Takes Communion! The headlines in Heaven’s Gazette must make for some sorrowful reading.

But we went. And we knelt in the darkness, with just the reading light above the lectern lighting the church, and listened to the age-old story. Greater love has no man than this … In my father’s house there are many mansions … I am the way, the truth, and the life … I will send the Comforter … Abide in me … If you love me, keep my commandments … In this world you will have tribulation, but be of good cheer … I pray that they might be one, as I and the Father are one … Now is my heart sick unto death … This is my body, broken for you …

Paula McNabb, a bright, vivacious mother of two in her mid-thirties, read those words. Paula has breast cancer, and all of her hair has fallen out because of the radiation treatments. Last night she wore a bright, shiny blonde wig, and the light from the lectern made her look like some kind of polyester angel with a rayon halo. She cried as she read the words, and I looked up from my reverie and saw an angel weeping. And eternity came nearer.

We sang an old hymn, “O Sacred Head, Now Wounded,” words by the ubiquitous Anonymous, music by that old showman J.S. Bach. This is what we sang:

O sacred head, now wounded,
With grief and shame weighed down,
Now scornfully surrounded
With thorns, thine only crown:
How pale thou art with anguish,
With sore abuse and scorn!
How does this visage languish
Which once was bright as morn!

What thou, my Lord, has suffered
Was all for sinners’ gain:
Mine, mine was the transgression,
But thine the deadly pain.
Lo, here I fall, my Savior!
‘Tis I deserve thy place;
Look on me with thy favor
Vouchsafe me to thy grace.

What language shall I borrow
To thank thee, dearest friend,
For this, thy dying sorrow,
Thy pity without end?
O make me thine forever;
And should I fainting be,
Lord, let me never, never
Outlive my love to thee.

I cannot sing that hymn, and I couldn’t sing it tonight. I make it to about the middle of the first verse and lose it, and then I kneel in dignified silence lest someone see a Strong, Competent Male Figure completely undone. But some of us sang, and some of us listened and prayed, and the night seemed very dark indeed.

A little later we took communion. Instead of the usual croutons and mini-shot glasses of grape juice, tonight we took communion by Intinction. That’s a fancy theological term that means that we all tore off a little hunk of bread and then dipped it into a cup of wine. We do this once a year, on Holy Thursday, and then we go back to the much safer, more sanitized croutons and shot glasses. But tonight I held that sopping bread, and I ate that bloody flesh, and eternity came nearer. For the first time in my life communion was both an act of revulsion and an agent of healing. I swallowed the broken body of the Son of God and I drank the blood from his wounds, and I could taste that flesh and that blood in the bread and wine, and it was sickening. But I ate death, pious, screaming father that I am, so that I might live.

And now it is 1:30 a.m. on Good Friday. The alarm will ring in four and a half hours, and the rest of the world will not care about bread and wine, or about a savior who died, and rose, and who still lives and abides with us, even weeping, cancer-stricken angels. The world does not care. T.S. Eliot puts it this way:

The dripping blood our only drink,
The bloody flesh our only food:
In spite of which we like to think
That we are sound, substantial flesh and blood
— Again, in spite of that, we call this Friday good.

I am sitting in a darkened room, bathed only in the light of a computer monitor, and I can look out the window to the northwest and see Comet Hale-Bopp. It is shining there, just above the edges of the rooftops. I have never seen a comet before, and it is a wondrous sight. Thirty-nine people in San Diego saw it and decided to end it all. They stuck out their cosmic thumbs and waited to be swept up into something beyond themselves, beyond the mundane world that doesn’t care about the hunger in the gut, or dying saviors, or weeping angels. Have mercy on them, O Lord. Have mercy on pious, screaming fathers, and mothers with cancer, and that little band that sits in the darkness in order to see eternity. There is an unnatural light in the sky on this most unnatural of days, a day of sorrows that we still, impossibly, pronounce Good.