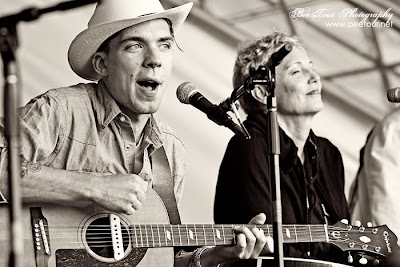 It was one of the strangest triple bills I've ever encountered -- country traditionalist Justin Townes Earle, indie-folk stalwarts Gretel, and hip-hop/roots artist Will Gray. Imagine Hank Williams hanging out with Leslie Feist hanging out with ?uestlove and The Roots and you're in the ballpark. Or, in this case, the bar; specifically, Cafe Rumba in the north campus neighborhood. Nashville, Boston, and L.A. came to Columbus. It was an unprecedented geographic and stylistic mashup, and it was was an astonishingly redemptive, soulful batch of fun.

Justin Townes Earle, as he took some pains to point out, is not only Steve Earle's son, but his mother Carol's son (wife number 3 of 8, for those keeping score at home). To say that there are a few unresolved, simmering father/son issues might be a major understatement. I saw Justin last spring at an outdoor festival. He was uneasy in front of a large crowd, I was 500 feet from the stage, and the resulting set left me underwhelmed. There were no such problems last night. Playing in front of a hundred people tightly packed into a dive bar, Justin and musical cohort Cory Younts absolutely ripped it up, playing a two-hour set that featured most of the songs from Justin's two albums The Good Life and Midnight at the Movies, and wide-reaching covers from The Replacements, Randy Newman, Townes Van Zant, and Buck Owens. This was the real truckstop jukebox shitkickin' deal, and watching Earle on stage, and listening to that impossibly raw, keening voice, it was impossible not to imagine oneself transported back to Montgomery, Alabama in the late '40s, as Hank Williams was rocketing off on an all-too-short but brilliant career. Look at that photo. I suspect Justin might be aware of those comparisons, too. But look, they're deserved. The guy absolutely channels Hank, and he writes some tunes that can hold their own with the master. He's also a very fine picker, an aspect that isn't highlighted enough on his albums, and with Younts on banjo, mandolin, harmonica, and harmony vocals, they roared through a honky-tonk set that was pure magic, and that left me grinning from ear to ear. 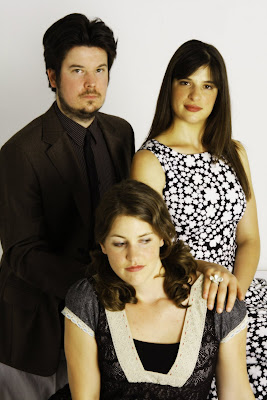 Gretel, these three attractive Bostonians to the left, play raw, uncompromising folk music that belies their wholesome image. Singer/songwriter Reva Williams (on the right) writes and sings poetic, introspective soul scourings that are frequently disquieting and alarming in their intensity. Check out some of the lyrics from "Car Bomb Times":

Angels or doctors I can't afford
But I can pay to get fucked up when I get bored
Forty days and forty nights now I prayed to the Lord
I think he said it's high time I fall on my own sword ...

Don't look for it at a worship conference near you any time soon. But if you value honest songwriting sung in a Lucinda Williams howl, and if you're one of the three or four Christians who doesn't have his/her life totally together, you might find some thoughts that resonate pretty deeply. Kate and I had the distinct pleasure of hanging out with Reva, Melissa, and Phil at dinner, and I'm so thankful for their musical talent, their unflinching writing, and their friendship. Their new album Dregs, out in April, is well worth your time. 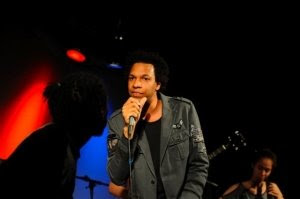 Will Gray and band took the stage about 1:30. I was skeptical: two rappers, a turntable maestro, an acoustic guitar player, a banjo picker (Reva Williams, from Gretel), and a cellist. Sure, dude. Good luck.

And it was absolutely mind-blowing. The rhymes were fabulous, Will Gray sang like an old-school Marvin Gaye, and that band, impossibly, gelled into a rockin', funky, folky R&B Americana machine. It was the freshest music I've heard in months. Will is currently recording his debut album with T Bone Burnett at the producer's helm. Watch for it in late summer or early fall. I know I will be.

Check out the video for Will's song "Back to the Wall" right here.

We left the house at 8:00 p.m., dragging our tired, middle-aged butts out for a night on the town. We arrived home at 3:00 a.m. and neither one of us wanted to go to bed. Such is the power and the wonder of great music. We saw it in abundance last night, a strange and wondrous sonic shot of joy. I live for nights like that, and I'm so thankful that every once in a while they turn from wistful dreams to reality.
Posted by Andy Whitman at 10:37 AM

Sounds great. Glad to hear there are places that'll still let bands "Play all night," as the poet said. I was at a Buddy Guy/BB King show in Detroit a couple weeks ago, and they literally brought BB's coat and hat onstage and shewed him off. Similar deal with the scheduling at Folk Fest in Ann Arbor (Jeff Tweedy, Carolina Chocalate Drops, etc). Seems like we're preoccupied with getting out on time that we fail to enjoy what brought us in in the first place.