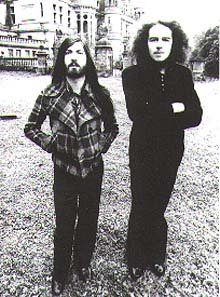 Looking for more of doomed, melancholy folkie Nick Drake? Fans knows that there is precious little of the real commodity: three proper albums, a fourth of outtakes, and a highly questionable and utterly irrelevant fifth, consisting of Nick's mom Molly taking a star turn and the 9-year-old Nick tootling on his clarinet. But for music in a similar lovely, brooding, melancholy vein, you could hardly do better than Irish duo Tir na Nog, pictured on the left. It's like two Nicks for the price of one. The self-titled debut, A Tear and a Smile, and Strong in the Sun, all from the early '70s, might be a little hard to track down, but are supremely worth the search. And if you're willing to venture a bit wider, several of the recently deceased Scots folkie John Martyn's early albums -- Bless the Weather, Solid Air, and Sunday's Child -- will call to mind Drake at his jazzy, meditative best. A little closer to home, Scott Appel's Nine of Swords is both a touching tribute to Drake's music (Appel covers several of Drake's best-known songs) and a logical continuation of Drake's music if he had lived.

Most Pointless Band Reunion, Ever

-- It's hard to blame the old coots; the economy's bad, and you still have to put the Swiss cheese on the table. But of all the pointless musical reunions, that of Focus may be the most pointless of all. You may or may not recall Focus and their one and only hit, "Hocus Pocus," from 1972. To refresh your memory, and to help you recall what you may long to forget, "Hocus Pocus" remains the only Top 40 hit to feature yodeling. Here they are in 2008, back together again after all these years, and reprising their hit.

Anacortes, Washington's The Lonely Forest are about to release the best power/indie pop album I've heard thus far this year. It's called We Sing the Body Electric (h/t Walt Whitman), and it's full of memorable hooks, indelible melodies, and loud guitars, just the way I like it. Check out their MySpace page to listen to the wondrous first single, "We Sing In Time."
Posted by Andy Whitman at 1:43 PM

I have the Hocus Pocus album. I'm not proud.

That YouTube video is truly disgusting! Original version much better

is your argument against the group Focus based on the fact that they employ yodeling in a song or that they only had one top 40 hit? either way, a pretty crumby reason for dissing a great band.

if this song was on the new Mastadon album rock journalists would be drooling all over it.

(i will admit that time has been cruel to This Van Leer, although he probably still has a leg up on Van Morrison.)

Chris (Christine?), I think Focus had their moments, and than Jan Akkerman, in particular, was a very fine musician. I'm not fond of "Hocus Pocus." It's a novelty song. I view it in the same light as the novelty hits of Alvin and the Chipmunks and Ray "Guitarzan" Stevens. Even with the fine musicianship, though, I wouldn't consider Focus a great band. The yodeling and the five-minute drum solos pretty much disqualified them from "great band" status, in my opinion.

this is chris (only me very best friends are allowed to call me christine).

obviously this is your blog, so you're opinions reign supreme, but two things:

1)given your distaste for things such as yodeling and drum solos, i'd better never read a kind word from you for Frank Zappa.

2)try to get ahold of a copy of Focus 3 and give it a good listen. i think you will not be disappointed (10min. drum solo not withstanding).

I actually like "Hocus Pocus," though I prefer the version from the 70s that's floating around YouTube from the Old Grey Whistle Test:
http://www.youtube.com/watch?v=bpV5InLw52U