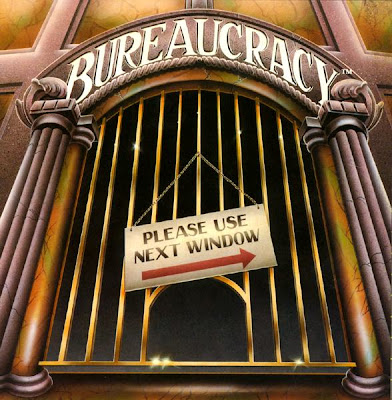 Numbers of people were lost in the Circumlocution Office. Unfortunates with wrongs, or with projects for the general welfare (and they had better have had wrongs at first, than have taken that bitter English recipe for certainly getting them), who in slow lapse of time and agony had passed safely through other public departments; who, according to rule, had been bullied in this, over-reached by that, and evaded by the other; got referred at last to the Circumlocution Office, and never reappeared in the light of day. Boards sat upon them, secretaries minuted upon them, commissioners gabbled about them, clerks registered, entered, checked, and ticked them off, and they melted away. In short, all the business of the country went through the Circumlocution Office, except the business that never came out of it; and its name was Legion.
-- Charles Dickens, from Little Dorritt

In one of the small ironies of my life, I once spent six months redesigning the State of Ohio web site that is used to file unemployment claims. Fittingly, the State of Ohio used none of my suggested improvements, because obfuscation and consternation are valued more highly than clarity and ease of use. God knows that if the average Jobless Joe could actually navigate the site, then even more unemployed people might file for unemployment compensation, and we can't have that.

Naturally enough, we start our tour of Bureaucratic Hell with the Login Screen (hereafter abbreviated as OH6423918O&C, OH for Ohio, 6423918 because random numbers are good, and O&C for Obfuscation and Consternation). Here the Blissfully Naive User (hereafter BNU), still actually expecting to receive money for his efforts, is encouraged to use either an existing login or create a new login. "Ah," the BNU thinks. "I'm new to this, so I'll create a new login." Already the faceless bureaucrats are snickering up their sleeves. After selecting "Create a new login" the BNU is instructed to enter a login ID and a PIN. And here's where the real fun starts. Regardless of what the BNU enters, he or she is directed back to the OH6423918O&C screen, and sees the message "Invalid PIN." "What the hell," the BNU thinks. "I'll try another number." But it doesn't matter, because each time the user is redirected back to OH6423918O&C. Thinking that perhaps the "N" in "PIN" might mean something other than "number," the BNU tries various alphanumeric combinations. An old address. The name of the first pet. The old high school locker combination. Nothing works. Finally, in deperation, the increasingly less blissful BNU notices the "Help" phone number at the bottom of the screen. "I give up," says the now merely naive user, and dials the number.

The NU is greeted by the sound of, you guessed it, a recording. In Spanish. Knowing very little Spanish, the user (no longer naive, and now merely U) tries several measures. "Buenos dias," he says. "Gordita." Nothing. The recording jabbers on for a while, then stops. Dead silence. After a two-minute interval, the recording resumes again. "May Day! May Day!," the U says. "Is there anybody out there?" But, of course, there is not. The U hangs up the phone.

After several phone calls to unemployed friends, the secret is revealed. The former BNU is instructed to call a different phone number, this one not listed on the web site. It seems that the BNU is expected to use the PIN he used five years ago, the last time he was laid off. No other PIN will do. And God knows that he can't remember that PIN. The new phone number connects to another recording, this one, yes, thank God, in English. After a short forty-five minute wait, the BNU actually speaks to a real human being, who resets his PIN. He should now be able to get into the system and start the 15-screen registration process.

And so he does. But he hits a snag on Page 4. "Enter your work code" he is instructed. The BNU isn't really sure what the work code is. "Be thrifty, productive, and industrious," he thinks, and "Be a good team player," but there isn't room enough to enter those things in the field. Being the savvy tech user that he is, the BNU opens up another tab and does a Google search on "Ohio Work Codes." And he is directed to a helpful web site that lists all Ohio work codes, such as "TZ49712" for "Welder" and "CW75619" for "Short Order Cook." The code lengths look about right. They should fit into the field. All he (a hypothetical "he," of course) has to do is find the right code for "Technical Writer/Web Designer and Developer/Marketing Communications Specialist/Usability Analyst/Business Analyst/Music Critic." Nope. Nothing. "Big-Rig Driver" they've got. "Lathe Operator" they've got. But nothing even remotely resembling anything he's done for the past quarter century. So the BNU decides to skip the field and move on. Bad move. The screen beeps and an error message flashes in angry red! HE MUST ENTER A WORK CODE! So the BNU identifies himself as a Short Order Cook. What the hell. Will cook food for food.

The BNU nostalgically recalls the conversations he had with various managerial types at the State of Ohio. "Nobody will understand this work code business," he told them. "They will have to," he was told. "Those work codes are hard-coded into the system." And so they were, and apparently still are. I can be a CW75619. Whatever it takes. And so, several days after he started, the TCU (Thoroughly Confused User) completes the registration process. After pressing the magic Submit button, he is informed that the State of Ohio is here to serve him, and that his Work Code will be used to match him with new job openings.

Three days later the TCU receives email notice of his first prospective job, a part-time opening for a Short Order Cook at Denny's.
Posted by Andy Whitman at 11:31 AM