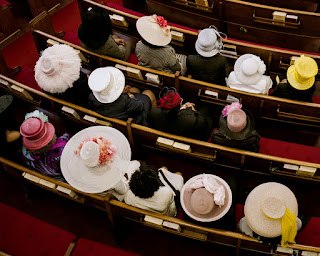 The words of my friend Jeffrey Overstreet:

This morning, I heard from a close friend whose heart is breaking because she finds it too painful, too disillusioning, to attend her church anymore. It’s gotten to the point where the language she has shared with them feels meaningless. When those whom you thought of as “the church” embrace a man who has inspired a huge and powerful movement of men and women to rally around slogans that flagrantly contradict the central teachings of Jesus, what does it mean anymore to be part of “the body”? How does one worship in the midst of obvious hypocrisy, or sing praises to a God of love in a chorus with those who will turn around and throw stones at their neighbors minutes later, or who think that God’s love only extends to them?

I think about this every day. And I think about it when I’m at church as well. Sometimes I wonder if it is better not to know. Because no one wears an “I Flagrantly Contradict the Central Teachings of Jesus” (IFCCTOJ) hat in the sanctuary, it is difficult to know who these folks might be. Polls suggest that about 44% of them in my church (down from 70% in evangelical churches) would, in fact, fit the general description. Because they’re not wearing the telltale hats, I pray for them indiscriminately. And I find myself, sometimes in the midst of a particularly long homily, wondering if I would pray for them indiscriminately if they were wearing the hats.

I’m pretty sure I would. I would pray for unity, as Jesus instructed us to do. But that unity would be focused on Jesus, who did, in fact, have some central teachings, and I would pray that the IFCCTOJ bunch would repent and follow Jesus. Take off your hat, take up a cross, love your neighbors; some of whom don’t look like you. That kind of thing. Is there a value judgment implicit in what I’m thinking during those moments during the long homilies? Oh, you bet. There is also a recognition that I’m a sinner, and that I don’t have it together. But yes, you bet, there is also a value judgment. Because, as a Christian, I am also supposed to think, and in the midst of loving my neighbor I am also supposed to be concerned with truth and justice.

This isn’t a case of “Well, it’s always this way: we’re all sinners, and any church is going to be imperfect, so grin and bear it.” This is a severe turn. I feel speechless when my students go out of their way to inform me that, for all my references to Christian faith in the classroom, they want nothing to do with it because they’ve seen just how useless and contradictory Christianity has been in the communities where they grew up. This is happening more and more frequently. “My parents are Christian, but I’m not. I cannot support what the church in this country endorses.” One woman told me that she has never read the Bible, and, in fact, she’s made a promise to herself *not* to read it because she’s horrified at what it turns people into. And I get it. Why would they want to join a church that is embracing, more and more every day, a Nazi playbook?

The IFCCTOJ bunch is destroying the Christian Church in America. That grieves me. I wish that they would follow Jesus instead, and I pray that they do.