The first time I was able to vote for President I voted primarily because I believed my candidate was a good man. That was 1976, and the man (there were only men under consideration at that point) was Jimmy Carter. Jimmy didn't have much political experience, and he was basically a peanut farmer, but I believed in his fundamental decency, as well as in his (then Evangelical, as it was understood; the times have changed juuuuust a bit since then) Christian faith.

I don't know if he was a great President. There are people who tell me he was not, although I tend to view his "problems" as outside of his control, and his downfall as the fault of the then-emerging Christian right that has fucked with both the country and Christianity ever since. At any rate, he has proven himself in the intervening 45 years to be very much a good man, perhaps the last of his breed, but perhaps not. He's still the only President in my lifetime that I would unequivocally trust as a human being.

This week I watched several interviews with Pete Buttigieg, 37-year-old mayor of South Bend, Indiana, and was reminded of my initial impression of Jimmy Carter. Buttigieg is smart, articulate, and multi-talented. As a Democrat, he polled 80% of the votes in a red city in a very red state. Beyond that, though, I listened to him speak off the cuff about a variety of issues and believed him to be a good man, someone I would actually want as my neighbor, for example, or someone I wouldn't feel deeply disturbed by if they hung out with my wife or daughters. This is progress.

Buttigieg is being touted as a potential presidential candidate. I would almost certainly vote for him, and his relative youth and lack of political experience is, in my mind, somewhat offset by the notion that we are currently dealing with a highly immoral reality TV star and game show host. He's also gay, which probably means that he has 0% chance of winning, because this is Amerikkka, and because there are millions of people who would automatically vote against him for that very reason.

But it was fairly refreshing to encounter a good man who also happened to be a politician. I miss those folks. 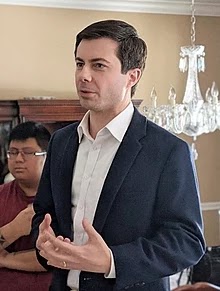