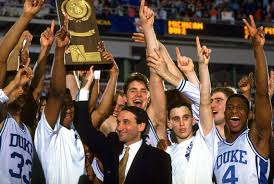 Once upon a time, colleges focused on education. The student-athletes (note the order) played sports, but were expected to attend classes and work toward graduation.

All of that changed a couple decades back when the universities, the NCAA,(the governing body of college sports) and the NBA colluded to make a mockery of the ol' alma mater. The biggest perpetrator was one John Calipari, coach of, first, the University of Memphis, and later the University of Kentucky, who started recruiting the best basketball players in the U.S. to play precisely one year. And so they did, winning a lot of games and some college basketball championships along the way before they abruptly departed for the NBA. If there was a silver lining, it was that this academic mockery occurred at the University of Memphis and the University of Kentucky, not exactly known for churning out Rhodes Scholars.

In 2019, the "finest" proponent of gaming the system is one Mike Krzyzewski, the head coach of Duke University's basketball team. Duke, you may recall, is one of the finest academic institutions in the land. This year Duke's team features not one, not two, not three, but four freshman players who will bid a fond farewell to the hallowed halls in May to take their chances in the NBA lottery draft. They may or may not have completed their freshman requirements. Who cares? It's a joke.

I don't blame the kids. They're doing what any 18-year-old with an opportunity to earn millions of dollars would do. But something is rotten in the state of North Carolina. And Kentucky. And most states. The rent-a-player stakes could not be higher, and it's very likely that Duke will win this year's college basketball championship. Meanwhile, the administration of Duke, and Kentucky, and God knows how many other schools, will still have to wake up and look themselves in the mirror and convince themselves that it's all about higher education.