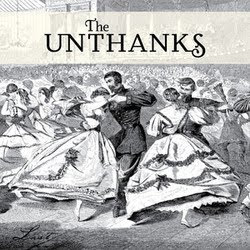 This may be the second golden age of British folk music. Nothing against Fairport Convention, Pentangle, and Steeleye Span, but there’s no need to hearken back to the glory days of the early 1970s to find adventurous folk-based music pouring out of Albion. Mumford and Sons and Laura Marling have the more commercial folk-pop side covered. Johnny Flynn continues to ply his wry, literate songs as a Dickensian ragamuffin. Kate Rusby holds down the Trad Nightingale post quite admirably. And Alasdair Roberts continues to spin out his cockeyed tales of knights, fair damsels, and metaphysical conundrums.

Last, the latest album from The Unthanks – yes, Unthank being the surname of sisters Rachel and Becky – belongs in that storied company. Like 2009’s Here’s The Tender Coming, Last is firmly based in Trad Britfolk territory, but that foundation is twisted and subverted in fascinating and lovely ways. Song titles like “The Gallowgate Lad” and “My Laddie Sits Ower Late Up” clearly point out the ancient nature of the proceedings, but those looking for a straight Trad album will be surprised. The songs invariably receive a stately, elegiac treatment from producer, pianist, and arranger Adrian McNally (Rachel’s husband), and the resulting austere chamber music and measured, mid-tempo arrangements often bear striking resemblance to American slowcore band Low.

Rachel and Becky sing, of course, and their voices, whether trading solo verses or entwined in those incomparable sibling harmonies, are nothing short of breathtaking. The northern coal country accents are so thick that it is often difficult to follow the narratives, but it doesn’t require a lyrics sheet to hear the melancholic beauty of the sublime singing, or the unrelenting sadness that drifts through these songs. Duskier and rougher than the comparatively airy Kate Rusby, the sisters manage to convey both the idiosyncratic burr of their native Northumbria and a luminous soul. This is wonderful singing.

The songs are variations on a theme, whether they come from ancient sources, Tom Waits (“No One Knows I’m Gone”), King Crimson (“Starless”), or Northumbrian songwriters Alex Glasgow or Jon Redfern. Life is short. Tragedy is always just around the corner. Love is fleeting. And yet something remains. This is bittersweet music written from a hard country, and it looks unflinchingly at inexplicable events and still manages to hold out for beauty and goodness. I’ll take that formula any day, or any century, and Last is built to live up to its title. These are gorgeous songs that will remain long after the latest flavor of the month has disappeared.
Posted by Andy Whitman at 12:24 PM