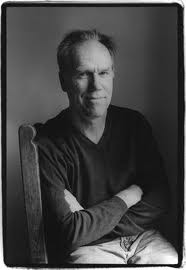 Finally, Loudon gets his own boxed set -- Forty Odd Years, 5 discs and 87 tracks, out in May. It's about time. Better known these days as the father of Rufus and Martha, Loudon Wainwright III has simply compiled one of the great, underappreciated catalogs in contemporary music. I've written about him before. I'm sure I'll write about him again. That's because he never fails to astonish me in his ability to peel back the layers of propriety and respectability and say the things that really go on in human relationships. This isn't warts-'n-all songwriting. Hell, this is probing the cancer at the heart of families, and putting the malignant cells under the microscope. God bless him and his dysfunctional life.

I learned I had to fight him
My own flesh blood bone & kin
But I felt I was just like him
Can a man's son be his twin?

And I saw how this could wound him
Yes this could do the trick
And if I made it big enough
I could kill him off quick
But how can you murder someone
In a way that they don't die?
I didn't want to kill him
That would be suicide

And the beard is a reminder
I'm a living part of him
Although my father's dead and gone
I'm his surviving twin
Posted by Andy Whitman at 9:33 AM