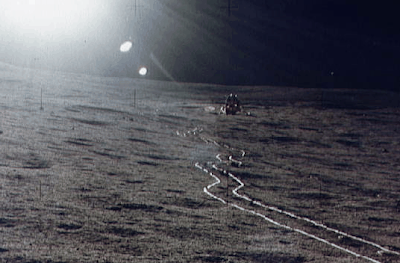 In honor of the 40th anniversary of Neil Armstrong's Lamest Quote Ever ("That's one small step for man, one giant leap for mankind, and one colossal argument for the need for a decent speechwriter"), I've compiled a list of my favorite moon songs. The criteria:

With that in mind:

-- Pink Moon (Nick Drake) -- Who knew, before Nick Drake, that a pink moon was an ominous sign of the apocalypse, or at least death by suicide at a young age? Now we know.

-- White Moon, Blue Moon, Red Moon, If the Moon Turns Green, Smog Moon (The White Stripes, too many to mention, but I'll pick Coleman Hawkins, Umphrey's McGree, Billie Holiday and Matthew Sweet, respectively) -- Judging by the colors, it's really a Rainbow Moon. Except when it's obscured by pollution, as Matthew Sweet notes.

-- 13 Blues for Thirteen Moons (A Silver Mt. Zion) -- Because every moon deserves its blues.

-- Blue Moon of Kentucky, Carolina Moon, Southern Moon, Cajun Moon (Bill Monroe, Thelonious Monk, The Louvin Brothers, and Ricky Skaggs, respectively) -- Most people recognize that the moon is not a regional possession, and cannot be claimed by the local denizens. Not people from the south. And I love them for it.

-- Marquee Moon, Grapefruit Moon (Television and Tom Waits, respectively) -- Everybody wants to pin a catchy adjective on the moon. These are a couple that work for me. As opposed to, say, Surfer Moon or Harvest Moon.

-- Jesus of the Moon (Nick Cave and the Bad Seeds) -- You think He's simply Lord of Planet Earth?

-- East of the Sun (and West of the Moon) (Too many to mention, but I prefer Jon Rauhouse's steel guitar take, with Neko Case handling the vocals) -- I don't know where this is, or how to travel there. But when Neko sings it, I want to go.
Posted by Andy Whitman at 12:18 PM

Have you checked out "Moonhead" by Pink Floyd? It was never released, per se, but is available on YouTube. It was a (live) jam during the first moonwalk. The video on YouTube is actually to videos from Apollo 17, not Apollo 11, but it's very cool. And I like the track itself.