Blood on the Tracks, The New York Sessions 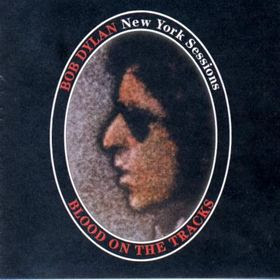 A lot of people tell me they enjoy that album. It's hard for me to relate to that. I mean, you know, people enjoying that type of pain, you know?
-- Bob Dylan, on Blood on the Tracks

It's hard to know how to approach the phenomenon of bootlegs -- the real ones, not the officially sanctioned releases that Columbia has been doling out from their vaults for the past eighteen years. Officially this album doesn't even exist. Except it does, you know, and if you're a Dylan fan, and particularly a fan of Blood on the Tracks, you might want to track it down. No, I didn't say that.

The story goes like this: In September, 1974, Bob Dylan hired a handful of NYC musicians, went into the studio, and recorded the batch of tunes that came to be known as Blood on the Tracks. Dissatisfied with the results, Dylan scrapped everything, and then traveled to Minneapolis, where he re-recorded the songs that were then released on the official album. But the New York sessions are widely available, and reveal a fascinating glimpse into the heart and mind of a mercurial singer and songwriter.

In general, the New York sessions are more relaxed and more monochromatic than the officially released songs. Dylan's dissatisfaction is understandable; he recorded ten tracks that didn't vary appreciably in terms of tempo or instrumentation, and the official release is far more interesting from a dynamic standpoint. But that's not to say that there aren't treasures galore on the New York sessions. Almost every song has been tweaked between the New York and Minneapolis recordings, and some of them --notably "Idiot Wind," "Lily, Rosemary and the Jack of Hearts," and "If You See Her, Say Hello" -- sound radically different. The snarling tirade on "Idiot Wind" -- one of its defining characteristics -- is noticeably absent on the New York sessions. More significantly, Dylan simply rewrote most of these tracks. It's mind-boggling. The verses that Dylan fans know by heart, these iconically memorable lines. seemingly emerged off the cuff. And the verses that were replaced, that can only be heard on the bootleg, are no less revelatory, the imagery leaping off the page, even without the musical accompaniment:

That one didn't make it on to the official release. Whatever. Most songwriters would give their first born to record songs as great as the ones Bob Dylan never bothered to release. In any event, if you'd like an alternate, but no less remarkable, take on a classic album, the New York sessions deliver in spades. And hearts, both broken and intact.
Posted by Andy Whitman at 1:41 PM

The acoustic guitar/bass version of "Lily, Rosemary and the jack of Hearts" as well is a revelation where the narrative is concerned. not only is the multi-episodic sprawl made clearer by the stripped arrangement and cool-eyed vocal delivery, but he also includes a fairly revealing verse dropped (accidentally, perhaps) from the official release:

Lily's arms were wrapped around
the man that she dearly loved to touch,
she forgot all about the man she couldn't stand
who hounded her so much.
"I've missed you so," she said to him
and he felt she was sincere,
but just beyond the door
he felt jealousy and fear--
it was just another night
in the life of the Jack of Hearts.

There's agood argument to be made that the song -as much of the album- is about fate, and about how, plan as we might, there is another player on every stage we occupy.

This version is also, like much of the New York sessions, terribly romantic. An inescapable mood.