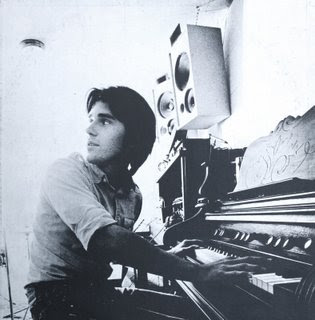 AMG Notes in a 5-star review today that Hip-O Select has compiled all the music Emitt Rhodes recorded between 1969 and 1973 and released it as a 2-CD set. Rhodes is the fifth (sixth?) Beatle, although he never met the Fab Four and he grew up in L.A., not Liverpool. But he did a better Paul McCartney imitation than Paul McCartney did after 1969, and anyone who appreciates, say, Revolver and Rubber Soul, which is pretty much everybody, will find much to love in his music. With any luck, Rhodes will be the Nick Drake of the late '00s, that unknown great artist whose rediscovery will make the hipsters drive environmentally friendly cars. One can hope, both for Emitt's sake and the good of mankind.
Posted by Andy Whitman at 9:19 AM

I've been listening to his self titled record for over a year and am quite impressed.

I'm not sure if throwing his career away is the right way to put it, the guy is still alive and has been making and recording music.

I just purchased this 2 cd set and though the tracks have been remastered, the remastering job is sub standard. The Edsel cd from 1998 titled Emitt Rhodes daisy-fresh from Hawthorne California(best of the Dunhill years), blows away the sound quality of the Hip-o release. Maybe they should have hired the person that remastered that cd, or maybe the tapes they had to work from were not the master tapes. Very glad Emitt's songs are now available, but very disappointed in the sound quality. Expected much better.