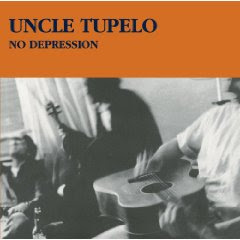 In this dark hour, midnight nearing
The tribulation time will come
The storms will hurl the midnight fear
And sweep lost millions to their doom

I'm going where there's no Depression
To a better land that's free from care
I'll leave this world of toil and trouble
My home's in heaven
I'm going there
-- A.P. Carter by way of Uncle Tupelo, "No Depression"

So there. That's No Depression. Now let me tell you about depression.

Depression is finding yourself in tears in the middle of the workday, and concerned co-workers wondering what's wrong with you, and you passing off your red eyes as something caused by allergies -- allergies being particularly problematic when it's December and 20 degrees and every spore-bearing plant and microorganism is dead. Sure. Why are you in tears? God only knows why. You certainly don't.

Depression is waking up at 3:00 a.m. in a panic. It's letting the waves of fear wash over you, and having no idea where they come from. Why are you afraid? You have a wife who loves you, and kids who love you, and who are wonderful near-adults now, and a good, challenging-but-not-overwelming job that more than pays the bills, and a boss who thinks you're the bees knees, and a fun hobby/second job that lets you spout off your opinions and get paid for doing so, and friends, and a great church with a great pastor who loves you, and new albums from Anathallo and Eleni Mandell to make you very, very happy. What the hell are you afraid of? God knows. You don't know.

Depression is thinking about all the books you might have written -- great books, too, the ones that would have been read in college classrooms a hundred years from now -- but didn't because you're too depressed to write for any sustained length of time. It's looking back on all the fucking waste. It's getting bummed out because you're bummed out all the time. It's a vicious cycle. It comes around every year about this time, when it's dark when you leave for work and dark when you leave work and most dark when you just want to hoist your middle finger to everybody who tells you to just buck up and count your blessings. Fuck you. What do you know or understand about any of this?

If you're me, here's how you cope: you escape. You escape in a book or an album, or, when you're feeling particularly frisky and counter-cultural, through more illegal means. You know why? Because it works. For a while, and after a fashion, you don't feel depressed. And then you come to your senses, usually against your will, kicking and screaming into the harsh light, and figure out that your wife is pissed off at you, that you've deeply hurt people who care about you, and that you're making a mockery of what you claim to believe and who you claim to be.

And if you're at all cognizant, you also recognize that God is involved in this process, sometimes miraculously, spectacularly, and painfully involved.

Figure it out. I certainly can't seem to do so. Welcome to the world of Andrew J. Whitman, Christian Asshole.
Posted by Andy Whitman at 1:37 PM

painful, heartfelt stuff. thanks for putting words to what otherwise might stay hidden. god be with you.

I for one am glad to hear that I'm not the only Christian Asshole out there. Should I really be taking comfort in that?

Anyway, thanks for being real. How can you really separate the music from other topics in your life? This blog is an excellent example of how music is so closely knit with life experience. And I for one appreciate your personal experience. I'm a stranger, but came across your writings by way of shared music interests. Yet, I learn a lot here.

"God gave rock and to you"

..."when you just want to hoist your middle finger to everybody who tells you to just buck up and count your blessings. Fuck you. What do you know or understand about any of this?"

I can relate to that Andy. I won't say I feel your pain, our pain is different I think...but I can relate. Hopefully we can talk sometime.

It's a screwed up world and our personal idiosyncracies sure don't help at all. I tell myself that my untreated ADD only balances out my untreated depression and whatever results is something that God not only understands a whole lot better than me, but is no big deal to Him; nothing He will let stand in the way of working in and through me. I really believe that. I've come to understand that as long as God hasn't retired, things are always a whole lot better than I can ever perceive them to be. I believe even on my best days, He loves me an awful lot more than I love myself and I try to make it my job to just let Him. He made me, He really knows me and He still loves me and has stuff He wants me and Him to do together; wow. Andy, that's worth remembering. I am so thankful for you.

I'm catching up, and reading this-- juxtaposed with the story about nice,kind iconic Woody Hayes losing his temper and punching a photographer and a member of an opposing team.

"You come of the Lord Adam and the Lady Eve, and that's both honor enough to lift up the head of the poorest beggar, and shame enough to bow the shoulders of the greatest emperor on earth." C.S. Lewis, Prince Caspian

Can't get away from it.

OK borrowing from Sixpence's newer song I pass along this:

I heard this song twice before I realized what it said and it spoke to me then and still does. Hope it can for you. I appreciate your candor and enjoy your blog.

I don't know you, but I love your blog, and I just prayed for you. My brother. Which is something.

I've always been too self-protective to be that honest. It's self-destructive in a self-serving way to put up the facade of having one's shit together - but it's often what we do.

Thanks, bro. Hope you muddle your way through at least long enough to come up for air.

It really is funny how things seem to be in the air.

I was fighting the encroaching suck this morning by commuting on bike. The song in my head that kept my cadence up was No Depression.

Then I got to work and decided to check Andy's blog.

"Oh fear the hearts of men are failing."

I frequently point to the lack of maintenance to the HVAC system...I grumble about dirty filters and pathogens....sometimes...

...others... I wander into that big dark storeroom in the back and look for something I lost.It usually takes a while, centered is a really ellusive target.

This might be a dumb suggestion which you've already tried and dismissed, but maybe you should try using a S.A.D. lamp. Getting depressed and anxious when the days get short is a classic symptom of Seasonal Affective Disorder. Apparently the lamps works wonders for people who suffer from that. Work health plans will usually reimburse you for one, too.

I don't mean to be callous and dismissive of your pain or your own ways of coping. It's just that I've been through a lot of the same depression and anxiety you describe, and I can tell you from my own experience that it doesn't have to be this way. Waking up at 3 am in a state of absolute dread, for no good reason? I've been there too many times myself. And while there are certainly spiritual and existential components to it all, the immediate causes and solutions can be surprisingly mundane.

Personally my depression isn't linked to the seasons, so the lamps don't do much for me. I find regular (vigorous) exercise, regular sleep patterns, and taking an anti-depressant every day or two helps keep me on an even keel. There are legal and more efficient ways of medicating yourself! ;-)

Again, I don't want to be condescending. When I was in the midst of my depression I found the idea that I was suffering for no good reason to be almost an affront, an insult to my low self-worth! It's just that I recognize myself in your description, and there are concrete steps possible to make your despair disappear. Or at least diminish remarkably.

As for the spiritual aspect, my doctor happens to be a wonderful Christian man who would argue that all healing comes from God, whether through measured doses of serotonin reuptake inhibitors, sun lamps, or in miracles. :-) You'll still have to cope with being an asshole at times but your emotional burdens can be a lot lighter.