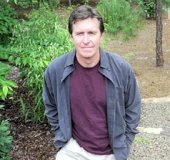 It is fitting that you can't find an Internet photo of Craig Fuller from his glory days with Pure Prairie League. Back in the day (and we're talking the early '70s here) he had hair down to the middle of his back, and he was writing songs that pretty much defined what came to be known as Country Rock (yes, before there was alt-country, y'allternative, and Americana, there was just Country Rock). For what it's worth, it's hard to find his old music these days, too. And now he looks like the guy who sold you life insurance last month. It's okay. Some of us remember.

Pure Prairie League's music came along at a time when I was discovering the wonders of Athens, Ohio, home to Ohio University. Athens was a picturesque little college town nestled in the foothills of the Appalachians, and Woodstock had hit hard, and the long-haired hippie freaks had found a home amongst those hills. The homes -- student ghetto specials, but nobody really cared -- didn't have back porches. They had front porches. And on warm fall or spring days, long-haired musicians could invariably be found on them, picking acoustic guitars and banjos and mandolins, sawing fiddles, strumming dulcimers. It was the hollers of academe, and there was a hoedown on every street corner.

Well, you can have your Eagles and your Pocos. I was happiest with the Flying Burrito Brothers and Pure Prairie League, the latter a bunch of hippie-freak Ohio natives who seemed launched from those front porches. The first PPL album was solid enough, drenched in electric guitars and pedal steel and soaring harmonies, but it was the second album, Bustin' Out, that sealed the stoner cowpoke deal. The whole album was a flat-out masterpiece, but it was the single called "Amie" that turned heads, an FM radio staple that so perfectly captured a time and a sound that I still can't hear it without thinking about those Athens front porches. Soon every would-be stoner cowpoke was playing it -- in local bars, in dormitory stairwells -- and Craig Fuller, who wrote and sang the tune, was the patron saint of every kid who ever wanted to write a pretty, plaintive love song, string together a sweet acoustic guitar riff, and get the girl. Which was pretty much every buckaroo I ever encountered.

A couple years later a new Pure Prairie League album came out, and I bought it the day it was released. There was no Craig Fuller. Where the hell was Craig Fuller? It turned out that Craig Fuller was trying to avoid the draft (yes, it was that time, too), and that fronting one of the better known rock bands of the era wasn't the way to do that. So the rest of the guys carried on without him. There was still the basic country rock template, but it wasn't the same. And although the lineups changed almost every album after that, and at one time took in a young Vince Gill, the magic just wasn't there anymore. It turned out that I wasn't a Pure Prairie League fan as much as I was a Craig Fuller fan. And I couldn't wait for Craig Fuller to resurface from the bunker, or wherever he was hiding, and get on with the business of crafting great country rock tunes.

I had to wait another couple years. This time Craig Fuller had a new band who called themselves American Flyer, after the sled. A supergroup of sorts (other members had played in The Blues Magoos, Blood, Sweat & Tears, and The Velvet Underground), they seemed poised for greatness, the next Crosby, Stills, Nash and Young ... and they sank like a (country) rock. Don't ask me why. The two albums (American Flyer and Spirit of a Woman, if or when you can actually find them) are just fine. Better than fine, actually. But they simply didn't sell. Here's what I know: while ten million people were buying The Eagles' Hotel California, Craig Fuller was quietly writing better songs and releasing better albums. It didn't matter. "You can check out anytime you like/But you can never leave" Don Henley told us, but he was wrong. Craig Fuller left. After a dispirited but decent wrap-up album with former American Flyer mate Eric Kaz (Fuller/Kaz), Fuller cashed in his chips and walked away from the music business. He was gone for more than a decade.

He re-emerged in the late '80s as the lead singer with Little Feat. By that point I didn't care. Lowell George was long gone, and I didn't want to hear my one-time musical hero covering songs I associated with another musical hero. So I stopped paying attention.

For me, Craig Fuller's music will always be associated with the 1970s. I hear he's re-formed Pure Prairie League. And no, I won't be checking out that reunion of old geezers, either. These things just depress me. But those five albums from the '70s (Pure Prairie League, Bustin' Out, American Flyer, Spirit of a Woman, Fuller/Kaz) retain a timeless excellence for me. Yeah, nostalgia probably plays a role. But these were great songs in 1972, and I think they're great songs in 2008. I don't have a front porch, and I long ago got the girl, but I'll still sing along with "Amie" every time I hear it.
Posted by Andy Whitman at 11:28 AM

Andy, I didn't know about your Appalachian familiarities. Nice. Throughout the 70's I lived in Tennessee (from Jefferson City to Knoxville), spent time with those porch musicians, had the rare privilege of being taught how to play the dulicimer by the legendary Dorsey Williams and yes, sat near the front when Pure Prairie League played one night at Carson-Newman College (oddly enough). Somewhere, I believe I actually still have their full size concert/album poster from that event. Thank you. Your article unexpectedly brings back those all too fond memories, so well.

Andy, you missed out on some FANTASTIC material..the 3 albums Craig did with the feat are truly a treat. I had the chance to see them during the tours that supported those releases and each show was everything you could ask for in a live show. I still listen to those cds often & I think in many ways they were some of the best feat recordings...in part to Craigs involvement in those projects, great voice!