We Call This Friday Good 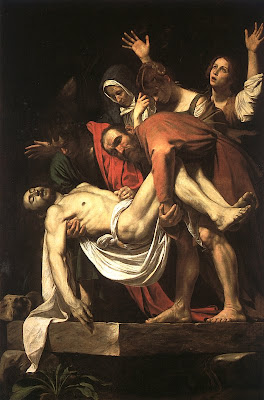 My childhood memories of Easter are inextricably linked with the Church Services from Hell. Growing up in the Catholic Church, Holy Thursday through Easter Sunday represented the ecclesiastical gauntlet. It took real courage and stamina to make it through four services in four days. The Good Friday service, in particular, was a killer. I write that metaphorically, of course. None of us had spikes through our hands or a spear through our side. But we had to stand and kneel a lot, and Father Soltis would solemnly intone almost three entire chapters from the Book of Matthew chronicling the arrest, crucifixion and death of Jesus. The readings alone took twenty minutes. And this was in the same church where the normal Epistle or Gospel readings consisted of three- or four-verse snippets, little biblical soundbytes to get us through our days.

But there was no way to turn the death of Jesus into a soundbyte. The gospel writers took up about a fifth of their narratives to tell the story, and made a big deal out of it. But other than feeling sad, I wasn’t quite sure how I was supposed to react. Jesus died, and then three days later he rose from the dead, and that was very cool, and quite unusual, and everybody got to eat chocolate and jellybeans and be happy again.

The cross, for my first twenty years on the planet, was the great mystery of the Christian faith to me. I don’t think I heard a single sermon that explained its relevance to my life. It made me feel very bad for Jesus, who was a good man, and the Son of God, and who could do many things, such as generate a lot of food from a little food, a quality I greatly admired. But the fact that the cross actually had something to do with my life was never explained.

I started to get it as a freshman in college. I wasn’t a Christian then. In fact, in my nineteen-year-old wisdom, and having figured out all the great problems of human existence that had baffled theologians and philosophers for millenia, I wanted to distance myself as far as I could from the superstitious teachings of an outmoded religion. But in an English class I read this:

The dripping blood our only drink,
The bloody flesh our only food:
In spite of which we like to think
That we are sound, substantial flesh and blood—
Again, in spite of that, we call this Friday good.
-- T.S. Eliot, from Four Quartets

Here was some evidence, albeit in highly poetic and cryptic form, that the cross had something to do with my life. I liked to think of myself as sound and substantial. After all, I had graduated from high school and been on the Honor Roll for four years, and I was well on my way to writing the Great American Novel, after which time untold generations of Americans would honor my memory and speak my name in hushed tones. That was pretty damn substantial.

But there was that business with the ruined millionaire and the dying nurse, those disturbing images of dripping blood and bloody flesh. I wasn’t quite sure what to make of them. They surely had to do with Satan, and the fallen world in which we live, and the cross, and communion. But they were so striking that I decided to just sit with them for a while, meditate on them, try to puzzle out their meaning to my life. And then there was that reference to being restored. Restored to what? Restored from what?

That was all a long time ago. In the meantime I’ve read a lot about the cross, listened to countless sermons about the cross, at one time puzzled over the Koine Greek in those chapters Father Soltis used to intone back in my childhood, trying to wring out every last nuance of meaning about the cross. Here is what I know: T. S. Eliot got through to me in ways that no church service ever could. I’ve bought into the paternal oversight of the ruined millionaire. I’ve been under the care of the dying nurse. And I am not sound and substantial. Our sickness – my sickness – was killing me. And the cross is the way back to health. And here’s the great irony, one that T.S. Eliot understood quite well himself: to get well, we have to die.

This is the way he concluded his great cycle of poems:

The dove descending breaks the air
With flame of incandescent terror
Of which the tongues declare
The one discharge from sin and error.
The only hope, or else despair
Lies in the choice of pyre or pyre—
To be redeemed from fire by fire.

Who then devised the torment? Love.
Love is the unfamiliar Name
Behind the hands that wove
The intolerable shirt of flame
Which human power cannot remove.
We only live, only suspire
Consumed by either fire or fire
-- T.S. Eliot, from Four Quartets

Dying is terrifying. Just ask Jesus, who sweated drops of blood thinking about it, and who cried out in agony on the cross. The Bible speaks of the Holy Spirit as a comforter. But there is another aspect to His work that we rarely think about, and which T.S. Eliot reminds us about. He is a terror. He convicts us that the only escape from the flames of hell are the flames that burn up all our useless striving, arrogance, accomplishments, self-sufficiency, all the shit with which we surround ourselves and insulate ourselves and tell ourselves that we are solid and substantial and good. These are holy flames, but they still burn. They are flames infused by love, but damn, they still burn. This is what the cross means: when I die, I live. It’s the great conundrum of human existence, and it’s a lesson I need to be retaught, day by day, because everything in me screams out for self-preservation, protests my own solidity and substantiality, wants to insist on my own innocence. But I am not. I am guilty. And I am forgiven. This is why the cross is good news. This is why we call this Friday good.
Posted by Andy Whitman at 1:17 PM

Beautiful; thanks. One of my most profound moments was when a Hindu friend asked me why we call it Good Friday if Jesus died.

For the last 40 days I have been struggling through lent, by not smoking or drinking. I also took up the dicipline of 40 minutes of silent meditative prayer a day.

The fact is I only struggled with the first seven days the other 33 have been filled with disappointment and regret that I could not stick it out.

But it hits me (I admit this has hit me before)... this is not about ME and my failures it's about HIM. From Luke... "And he said to them, "I have eagerly desired to eat this Passover with you before I suffer."

How long has He waited to eat this meal with me. To begin this new thing, this new covenant initiated by the Father. He makes the first move, I can only accept the offer.

It is a Good Friday to be reminded of who does the heavy lifting when God strikes a covenant.

re: "T. S. Eliot got through to me in ways that no church service ever could."

I love that God speaks to each of us in a language that we can understand.

Brilliant, Andy. Thanks for sharing that poem. Powerful good.