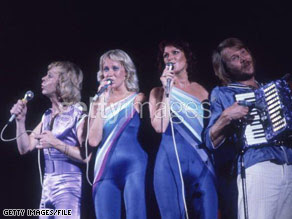 That’s Abba. They had an accordion player. I didn’t know they had a drummer, but they did. I guess it makes sense that somebody had to lay down the beats for the dancing queens. He died yesterday, falling through the roof of his greenhouse and slitting his throat on the broken glass. This sounds like a very suspicious way to die (slitting his throat on the broken greenhouse glass? Really?), but that’s what they say.

I am reaching a point where I just don’t care that much about new music. It will pass. It always does. But right now I’m quite weary of reading breathless reports from SXSW about this or that buzz band. You know why? Because it’s all been done before, and I get tired of the artificial hype. Some 1,600 musicians/bands played at SXSW, a few of them well known, but most of them neophytes looking for their big break. Vampire Weekend, the current Big Buzz Band (last month it was Columbus’s own Times New Viking) played at SXSW, and drew lots of attention to themselves. They are, get this, a bunch of preppy students from Columbia University who mix Afro-pop with their indie rock and write songs about Oxford commas and mansard roofs. I don’t mind that they steal from Paul Simon. If you’re going to steal, Graceland is pretty great source material. I just find the relentless hype about the Next New Thing to be really old. One thing for sure: there’s nothing new about Vampire Weekend. Check out the Indestructible Beat of Soweto compilations on Shanachie from the mid- to late-‘80s to hear the people who did it first, and who had more important things on their minds than Oxford commas and mansard roofs.

Two of the big buzz bands have the word “Fuck” in their name: Holy Fuck and Fuck Buttons. I suppose this was inevitable, and probably represents the penultimate way to proclaim one’s independent-thinking, anti-authoritarian stance to the sheeplike indie masses. But I get tired of that, too. And why the hostility toward buttons? Zippers, hell yes. The damn things break, and pretty much ruin your winter parka. Fuck zippers. Fuck ‘em all. I’ll probably feel better tomorrow. But today I think I’ll take a break from music.
Posted by Andy Whitman at 1:15 PM

But it's St. Patrick's Day - which gives us an excuse to trot out anything celtic or even borderline Irish. Right now, I've got on one of my all-time favorites, Irish Heartbeat.

It is indeed St. Patrick's Day. Way back when my English ancestors were probably firing bullets into the rock lobbing mob in Dublin. Nothing against the Irish, though. I love the Irish, particularly their ale and their music. And in keeping with my fucking mood, I think I'll go home tonight and play The Pogues:

Twenty fucking five to one
Me gambling days are done
I bet on a horse called the bottle of smoke
And my horse won
-- The Pogues, "Bottle of Smoke"

I ran into a couple of the Fuck Buttons in the elevator at my hotel this past weekend. I really thought they had a definite article on the front of their band name, though I'm a bit relieved to learn they do not. It sounds less obscene and more pro-velcro even if it is a bit militant. I'm pretty sure their attire wasn't completely buttonless. They seemed pretty normal... for Brits.

It's oddly comforting to hear you say that. I've been feeling some of that fatigue myself, and recently decided I should try to listen to less music, not more. Maybe spending more time with fewer albums would do me good.

That drummer had a death worthy of Spinal Tap.

Fuck buttons? Do they have something against the Amish. There's another band name for you.

Actually, there used to be a band (and they may still be around) around Indianapolis called the Electric Amish. Think about it.

I'm feeling a little overloaded lately myself, between work and a bunch of CDs I still haven't listened too. I'm feeling nostalgic for my college days when I didn't have as much money and had to be really selective about buying LPs, lest I waste it on something that really wasn't that good.

When will bigots stop targeting the Amish? What's next? "To hell with butter churning?"

Carol, I know. If I were Amish I'd take up arms and protest. It's not fair.

But then again, I wouldn't be a good Amish person if I did that. Still, what's wrong with buttons? It makes me mad enough to take up a pitchfork and harrass the button denigrators.

Buttons are ornamental, worldly, a potential source of vanity. (My father was Amish until he was around 8 yrs old.)

I get Amish-stereotype fatigue, myself.

Ironically(?) I just surfed over here from Sufjan Stevens singing "Come Thou Fount of Every Blessing." The good stuff has been done before, and it was about things that mattered.

Buttons are difficult for people with arthritis to fasten and unfasten. They're also difficult for children with developmental delays-- cognitive or fine motor.

If you make your own clothes, buttonholes are difficult to make, especially if you don't have a sewing machine, treadle or electric.
For some people, in some cultures, at some periods in time, buttons are probably hard to find or make. They may be prohibitively expensive. Last week, I saw some Indian womens' clotning consisting of large rectangles of material, intended to be held together by tucking and tying knots.

One last perseveration. Maybe the band is taking issue with buttons that promote political positions or proclaim facile slogans. Life cannot be reduced to platitudes (unless you're in the right mood,and they're not). The local Sierra Club offers dozens at their table at International Festival.

I bought "We can all work together." But maybe not--in the case of this band.
finis.....