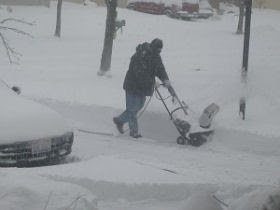 So we've had sixteen inches of snow here in the past twenty-four hours, with two or three more to go, according to the weather man.

Columbus news stations are in an absolute frenzy. You have to understand that with a normal Columbus snowfall (2 - 3 inches), all the news is given over to worried meteorologists tracking the storm, multiple shots of snowplows plowing the streets, interviews with guys who estimate how much salt the city of Columbus still has in reserve, pictures of cars that have slid off into the ditch, etc. But this is the mother of all winter snow storms. I suspect that reporters will still be filing breathless reports on this in July.
Posted by Andy Whitman at 3:11 PM