No Country for Old Magazines 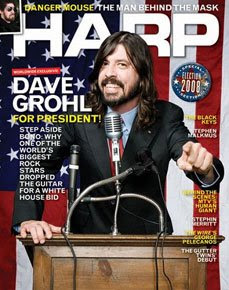 Harp Magazine announced on Monday that their current March/April issue (Dave Grohl for President on the cover) would be their last. This now makes three music magazines (Contemporary Christian Music, No Depression, and Harp) that have folded within the past month. T.S. Eliot was right. April is the cruellest month.
Harp was one of Paste's primary competitors. So am I happy that there's one less competitor out there? Not at all. First, Harp was a fine magazine. Its articles were well written, its scope was eclectic, and its mission was a noble one -- to shine a light on the thousands of worthy musicians and bands who didn't fit within the narrow confines of the Top 40/MTV/American Idol hegemony. The world, in general, is a better place when more people write about these things, not less. Second, a number of talented writers (not to mention the editors) depended on Harp for (at least part of) their livelihoods. I feel bad for them.
Music magazines come and go. The shelf-life (quite literally in this case) is usually a few years. Harp made it for eight, longer than most. But it's bad out there, folks, and right now this is no country for old magazines. It's hard to justify the $20 or $30 per year it might cost to subscribe to a music magazine when it costs $60 every time you fill up your gas tank. So chalk it up to a lousy economy, less disposable income, and the increasing tendency for music fans to check out online vs. print sources for their daily/weekly/monthly musical fixes. R.I.P, Harp. We hardly knew ye.
Posted by Andy Whitman at 8:23 AM

that is too bad. i had never heard of Harp until the Grohl for president cover...now, i'm too little too late.

I think its also indicative of the fact that we have too many hands in too many cookie jars, so we feel that there is less disposable income (which is true to a point with gas and such) to put towards things like magazines subscriptions. Maybe if our families didn't have 4 cellphones, 5 computers, 6 tvs, 250 channels of cable...well, you get the idea. A generalization...yes, but one I see lived out quite often.

Paste is the only print music magazine I subscribe to, mainly because I live up the road from the office and often eat my lunch next door to it and play occasional gigs in the same complex. So I'm cheering for paste big time. But when No Depression folded I felt really bad, like I should have been subscribing to that too. And same with Harp now. Because I want people to keep getting paid for writing and editing. But Oxford American needs my support too, and I hate to give up all the other periodicals I read. OK, maybe I could do without Fly Fishing Quarterly, but I don't know . . .