Truth, Justice, and the American Way 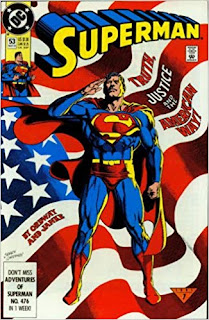 Please consider voting for someone other than Donald Trump for President of the United States in November, 2020. I understand that the sanctity of life is very important to you, probably the most important issue to you. I understand that many of you believe so strongly and passionately about this issue that every other issue pales in comparison, and that some of you would consider yourselves one-issue voters because no other issue, and indeed no other combination of issues, could possibly be more urgent and more significant than the fact that 860,000 babies per year are aborted in the United States.

I get all that. I understand your position. And I’m asking you to vote for someone other than Donald Trump anyway.

There are several reasons for that. But let’s start with what your vote for Donald Trump does not achieve. First, your staunch support of anti-abortion policies does not result in a dramatic increase in saved lives. I wish it did. But it does not. Here is a link to a September, 2019 summary of current abortion statistics in the United States: https://www.guttmacher.org/report/abortion-incidence-service-availability-us-2017. It analyzes current abortion statistics from a variety of perspectives. I encourage you to read it. One item I would like to point out is that there is no correlation between the number of abortion clinics and the number of abortions. In other words, fewer abortion clinics does not result in fewer abortions. In some cases, noted in the study, states that saw abortion clinics close between 2014 and 2017 actually reported higher numbers of abortions during those years.

Overall, the number of abortions continues to decline in the U.S. from a high of 1.6 million per year in the U.S. in 1980 (or 29.3 per 1,000 women between the ages of 15 and 44) to approximately 860,000 per year in 2017 (or 13.5 per 1,000 women between the ages of 15 and 44). This is a trend that has been consistent for almost the past 40 years, and has obviously carried across multiple Democratic and Republican presidential administrations. In other words, abortions are declining. They declined during the George H.W. Bush, Bill Clinton, George W. Bush, and Barack Obama administrations. They are declining during the Donald Trump administration. But your vote along party lines, quite clearly, doesn’t affect that. If you’re a pro-life person, you should feel somewhat heartened. The number of abortions is going down. But it’s not because of who sits in the Oval Office.

So let’s discuss who sits in the Oval Office, and how that might affect a few other things. Let’s discuss what a vote for Donald Trump in 2020 DOES mean. But before I go there, let me note one of my underlying assumptions: you do not vote according to your pocketbook. It’s okay. I don’t either.

In the 1990s, Bill Clinton was (in)famous for many reasons. But one of them was his terse summary of what drove voters: “It’s the economy, stupid.” That is, economic concerns were more important than any other issues, regardless of their moral and ethical import. I’m betting that Bill was wrong then, and that he’s wrong now because of your overarching beliefs and principles. You, after all, have made one issue supreme over all others, and it’s not the economy, stupid. He’s wrong for me. I’m working on the assumption that he’s wrong for you as well, and that the economy, which in general has performed well during the Trump administration, is not what will motivate you when you step into a voting booth in November, 2020. Are we in agreement?

So let’s talk pro-life. Historically, the term has become synonymous with anti-abortion. But the words, in and of themselves, obviously encompass life – inside the womb, outside the womb, from conception through the end of life. So when we speak about being pro-life, I think it’s important to consider the implications of the statements of the President and the policies (s)he supports to gauge the total impact on life, from conception through death. And how do the words and the deeds of Donald Trump measure up according to that standard? To quote New York Times columnist David Leonhardt):

And to quote no one but myself:

I’m summarizing. Hundreds of real-life examples, with dates, citations, links, and videos are available upon request.

Read that laundry list. No, really, read it. Many of you, my pro-life friends, identify as Christians, and you have given your allegiance to Jesus, and to the understanding of Jesus as revealed to you through the Bible and the historic teachings of the Christian Church. Is there anything in that laundry list that reminds you of Jesus? Anything? One thing?

So please do me a favor. Do not vote for this man in 2020. He makes a mockery of everything you claim to believe and value. He raises the serious specter of blatant hypocrisy in your midst when you claim to follow Jesus and still support him.

So vote for someone, anyone else. I’m not kidding. If the thought of voting for a Democrat sends you into paroxysms of panic and grief, don’t vote for a Democrat. Vote for another Republican. Vote for a third-party candidate. Get your friends together, talk it over, and come up with a strategy to elect someone else. But please don’t vote for Donald Trump. It’s a very bad look. The world – people you claim to love, people Jesus died for – is watching, and they are repulsed by what they see. So is much of the Christian Church. They see a segment of America that claims to follow Jesus but has utterly lost the plot, that is driven by fear of the other and by a series of grievances against not Satan, not foreign powers opposed to the nation we love, but other Americans. For the sake of Truth, Justice and the American Way (yep, all three) cast your vote for anyone other than Donald Trump next November.