The Mandate of Heaven 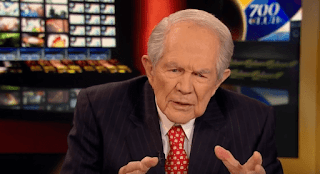 There is a lot to swallow with Christianity. Virgin births. One God in three persons, two of them invisible, and the other one a real human being/divinity who lived 2,000 years ago but is still alive. Resurrections from the dead. And that’s just for starters. But the strangest, most unlikely supernatural occurrence may have to do with Donald Trump losing the mandate of heaven.

I’m not sure how Donald Trump got the mandate, or how one would know, but according to televangelist Pat Robertson, he has the mandate. And he could lose it – could very well chuck the whole enthusiastic approval and holy imprimatur from the Creator of the Universe – by his support of Turkey instead of the U.S.’s Kurdish allies.

Part of me agrees with Pat Robertson, which in itself is a minor miracle. I think what Turnabout Trump is allowing to happen to the Kurds is a tragedy and a betrayal. But I still have all kinds of questions about the mandate of heaven. Presumably, 73 years of lying and grifting, blowing through marriages like test drives of new cars, and pursuing porn stars while his third wife was home with his infant son weren’t enough to shake the mandate of heaven. Still good, St. Don. Apparently, theological non-sequiturs such as maintaining that he had no reason to pray or repent because he had never done anything wrong weren’t enough to topple the Heavenly Mandate crown. The 13,000 lies in three years? The narcissistic preening? The constant fits of bluster and profanity? Caging toddlers? Referring to human beings as savages and cockroaches and infestations? Mocking disabled people? Threatening to sic his thugs on those who disagreed with him? Blessed are the thugs. No big deal. It’s apparently what Jesus would do, right? Mandate from Heaven territory.

But you mess with the Kurds and you’re risking the departure of God’s glory.

I love Jesus. This is why I continue as a Christian. But one has to ignore a lot of absurdity from Christians. I can deal with virgin births and resurrections far easier than I can deal with the mental and spiritual gymnastics that have to take place to not only excuse, but to exult Donald Trump. This is just more of the ridiculousness and heartbreaking sorrow that has characterized the last half decade of my life.