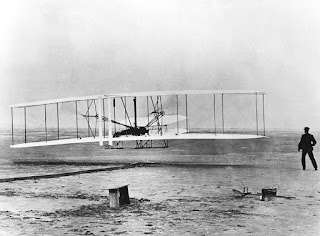 I'm guessing that I've been in airplanes hundreds of times. But every single time it happens, I think to myself "I'm sitting in a big metal tube flying through the air," and it never ceases to astound me.

Today I visited the U.S. Air Force Museum outside of Dayton, Ohio, and that never ceases to astound me, either. Right down the road from Wilbur and Orville Wright's bicycle shop, and a couple miles west of the big open field in which they launched themselves into the air and prepared the way for those big metal tubes, the Air Force Museum is a stupendous monument to these magnificent men and their flying machines. We were there all day and saw roughly one-third of what there was to see. I've been there before, but I'll be back. Because the vision still dazzles me after all these years.

There must be something about the flat Ohio corn fields. Wilbur and Orville dreamed their dreams in them, and so did John Glenn down in New Concord, and so did Neil Armstrong up in Wapakoneta, about an hour north of Dayton. Farm kids who looked up, way up, from the tops of the corn stalks.

So too did my father-in-law, Carroll Krupp, raised on a farm not too far from Wapakoneta. Carroll was a child of the Depression, and his parents could barely afford to put food on the table, let alone send their dreaming son off to college. So Carroll did it on his own and took flight lessons in his early twenties, and was doing loop-de-loops his second time out, scaring his instructor and calling down the wrath of the authorities. By the time he quit he had 44 patents to his name, and he had designed spacesuits for NASA and brakes for big commercial airplanes and diving suits for deep sea diving. I see his handiwork in the Smithsonian Air and Space Museum whenever we venture to D.C.

Carroll, who was quiet and timid and a genius at designing and making things with his hands, didn't like the fact that I wanted to marry his youngest daughter. We circled one another warily for a while until he figured out that maybe, just maybe, it might work out between young Kathleen and this upstart Creative Writing buffoon. We're approaching four decades now, and he probably would have made his peace with the notion at this point. He is, alas, long gone.

But I think about him every time we venture over to Dayton, Ohio, drive through the flat cornfields to witness the massive, sprawling place that honors him and all the magnificent young men and their flying machines. All those Ohio fly boys made their mark, dreamed big dreams, and, by God, flew through the air. I'm still astounded.