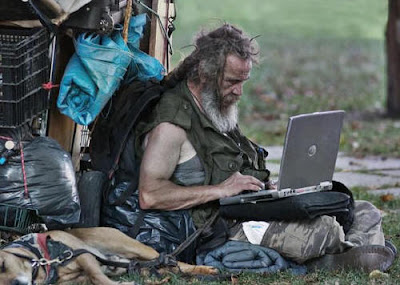 Meet Bart “Scoop” Scrivener, America’s Next Top Homeless Person. Scoop may look like a derelict. In fact, he is. But he’s just waiting to be discovered by a camera toting, kind-hearted passerby who happens to stumble upon his makeshift campsight behind an abandoned warehouse in Youngstown, Ohio. Will today be the day that changes Scoop’s life? Will you be the angel who helps him find his deserved fame and fortune?

A Pulitzer Prize winning journalist in 2003, Scoop fell on hard times when his former employer, The Ashtabula Times Picayune, laid him off in favor of carrying shorter stories via Twitter. At first Scoop tried adjusting to the new format, with his “Am I doing this right? WTF?” @Scoop tweet considered one of the finest early examples of meta-tweeting. But the past three years have been brutal. “I tried being concise,” he says. “I tried not using adjectives or verbs, abbreviating wherever I could, using smiley faces. It was no use. I couldn’t say anything worthwhile in less than 140 characters.” Left to fend for himself, but still driven by the insatiable need to use words, Scoop took to ghostwriting books for former Presidential candidates. When that well dried up, there was nothing to do but post lengthy diatribes on his personal blog, bitter harrangues that would have constituted dozens of individual tweets. “It’s sad,” he admits. “But nobody reads blogs anymore. At one time I could count on 10, 20 comments per day. Now I’m lucky if I get spammed for erectile dysfunction medication.”

It doesn’t have to end here. Will you help Scoop become America’s Next Top Homeless Person? Scoop is available for interviews (in-person or Skype), the occasional journalistic puff piece, and celebrity endorsements.
Posted by Andy Whitman at 10:40 AM

I don't even know how I read this. I'm to broke to make this guy famous. Heck he'd probably become more famous than I'll ever be, that's for sure.

I know that you are trying to be funny, but I would like to pose a serious question. Why is it that poor people can be given large sums of money and in a relatively short amount of time they end up poor again?

I think it has to do with impulse control. The homeless guy in the picture possess technology that would have made him the envy of geeks from past decades, yet despite having this, he can't get past his lack of self-discipline. At best, he is probably a guy who smokes and drinks. What little money he does get goes towards cigarettes and malt liquor.

There is also the possibility that he is smoking something strionger than cigarettes, but the point doesn't change. Self discipline is the most valuable thing a person can have.