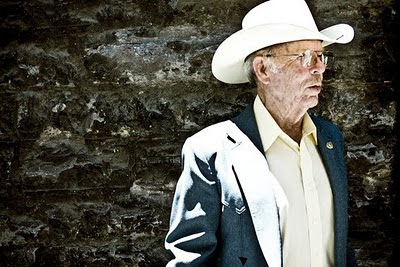 Charlie Louvin died earlier today. I first heard The Louvin Brothers' songs through the usual Baby Boomer sources -- Emmylou Harris and Gram Parsons. But the real deal, courtesy of Charlie and Ira, was even better. Nobody ever sang harmonies better. Ever. He was a great one.

In honor of his passing, I'm resurrecting an old article from Paste.

It may be the most startling and strangest album cover in music history. In 1960 the Louvin Brothers, arguably the greatest country duo of all time, released an album called Satan Is Real. The cover art has become something of a kitsch classic. A beaming Charlie and Ira Louvin stand in the foreground, adorned in snowy white suits, arms outstretched in a come-home-to-Jesus pose. Behind them a bed of smoldering lava threatens to inundate the would-be evangelists. And in the background is the cheesy masterstroke: a 12-foot cardboard cutout of Beelzebub himself, a crude rendering of the devil complete with horns, slanted eyes, a pitchfork and vampire-like protruding fangs. It is so garish, so over-the-top, that it would have amused even the most zealous of Bible-thumping fundamentalists.

The devil looks like he’s ready to pounce. And Ira Louvin would have certainly confirmed that that was no laughing matter. Ira would have told you that the album title simply reflected personal experience. He alienated and abused almost every single person who crossed his path. He drank constantly, cheated compulsively, married and discarded three wives, and walked around with three bullets buried near his spine — the work of his third wife, who shot him five times after he tried to strangle her with a telephone cord. “Ira Louvin was the meanest son of a bitch I ever met,” one of his former managers stated flatly. And therein lies the conundrum; Ira Louvin lived like he was haunted by demons, and sang like a slumming angel.

Ira Louvin and his brother Charlie, three years younger, were born and raised in the hills of northeast Alabama, and even when their music took on a more sophisticated, urbane sound in the late 1950s, they never lost the characteristic bite and yelp of their Appalachian heritage. They also never lost their lifelong enmity for one another. They occasionally loved like brothers, but mostly they fought like brothers, and when their voices intertwined, they sang with a transcendent beauty and a palpable tension that perhaps only brothers can create.

It was a tension between the sacred and profane, and it defined both the lives and the music of the Louvin Brothers. Ira, the raging drunk, and Charlie, the pious churchgoing teetotaler, could not have been more different in temperament, and their differences reveal themselves repeatedly in the music. Sometimes they played it straight, and songs like “The Family Who Prays,” “The Christian Life,” “The Angels Rejoiced Last Night,” and the be-saved-or-be-nuked Cold War classic “Great Atomic Power” are now recognized as standards of the country gospel genre. Sometimes they played the part of grieving, heartbroken lovers, and songs like “When I Stop Dreaming,” “If I Could Only Win Your Love,” “You’re Running Wild,” and “You’re Learning” provide the template for the close-harmony singing of The Everly Brothers and Simon and Garfunkel. Gram Parsons, who recorded their songs as part of The Byrds and The Flying Burrito Brothers, brought the Louvin’s music to a new generation of rock ‘n rollers, and then passed it on to Emmylou Harris, who has carried the Louvin torch throughout her career.

It is as fine a body of work as country music has produced. But it is Ira’s gospel songs, the songs of the conflicted, raging drunk -- full of not love, but fury, not grace, but judgment, not joy, but deep regret – that continue to haunt and trouble me. Ira fought a pitched battle with God and Satan, who were very real -- and lost on both counts. In early 1965, on a song called “The Price of the Bottle (Is Just a Down Payment)” he sang:

I talked to myself one night in my room
And looked back on my wasted years,
Just me and my conscience while facing my doom …
A slave to the bottle that makes a man fall
And sink to a life of regret.

It’s the stuff of classic country music, played on honky-tonk and truck stop jukeboxes all over America. But Ira Louvin was simply singing his life.

So maybe he knew, somehow, what the end was to be. It is startling, in retrospect, to hear the number of Louvin Brothers songs in which drunk driving and violent death figure prominently. It is the logical end of those for whom Satan is all too real, who cannot escape the clutches of their addictions, and Ira sings these cautionary tales with the sure knowledge of one who wishes to be saved and yet knows he is doomed. One of the last songs the brothers recorded, the suitably melodramatic “Wreck on the Highway,” finds that potent mixture of the sacred and profane that characterized all their best work. Now it sounds prophetic:

O who did you say it was, brother?
Who was it fell by the way?
When whiskey and blood ran together
Did you hear anyone pray?

In June, 1965, Ira and his fourth wife, singer Anne Young, were killed by a drunk driver in a fiery collision outside of Williamsburg, Missouri. He was forty-one years old. At the time of his death, he had a warrant out for his arrest on DUI charges. Charlie, now in his late seventies, still occasionally performs, and toured with the rock band Cake as recently as 2003.

The brothers’ harmonies remain; soaring and otherworldly, alternately sweet and jarring, beautiful and harrowing, a musical tug of war that echoes into eternity.
Posted by Andy Whitman at 1:23 PM

When I read that Charlie Louvin died this morning, I knew I could come here and find this. Thanks for "resurrecting" this article.

Nobody ever sang harmonies better? Ever?

John, nope, not in my opinion. I'm serious. I'm a huge fan of country duets, and the close high-harmony singing of The Louvin Brothers provided the template for many of my favorites, including Emmylou Harris and her 1,863 duet partners, and Buddy and Julie Miller. The influence of Charlie and Ira on the music world is incalculable.

Plus, there's something about sibling harmonies that just can't be easily replicated.

There's plenty of bizarre theology in the songs (basically, you can be murdered randomly at any time, at which point you'll fall into the hands of a vengeful God), but there's nothing but heaven in those harmonies: http://www.audiopuzzle.com/discovery/song-248276/youre-learning/?s=1#overview