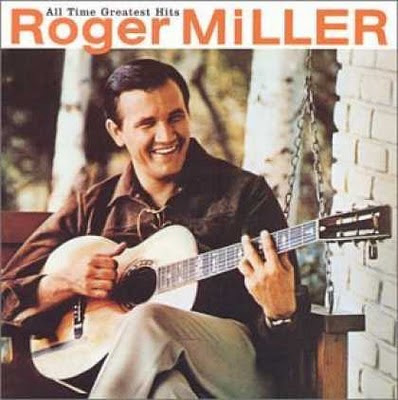 When I was a kid my parents owned about 20 albums, and they played them over and over again: Frank Sinatra, Herb Alpert and The Tijuana Brass, Ferrante and Teischer, The Ray Conniff Singers, Andy Williams, etc. It was a representative if small collection of what suburban adults were listening to in the mid-60s. The album that didn’t make sense, that never quite fit in with the rest of the collection, was Roger Miller’s Golden Hits. Naturally, that was the album that I listened to over and over again. Those songs may be imprinted in my DNA.

Roger Miller was, ostensibly, a country singer. That’s how he was categorized and marketed, and that’s how the Country Music Hall of Fame considers him. But to my pre-adolescent ears he simply wrote funny songs. Aside from his biggest hit “King of the Road,” which still doesn’t sound like a country song to me, his best-known songs were novelty numbers full of goofy lyrics. “You can’t rollerskate in a buffalo herd,” one of his songs proclaimed, and I never doubted it, although I sang along like a fanboy. Another one announced, “Roses are red, violets are purple, sugar’s sweet and so's maple surple." As a ten-year-old, I was enthralled by the poetic genius. It was a neat dozen songs in about half an hour, and it was my favorite childhood album.

A few weeks ago I picked up the expanded version of Roger Miller’s Greatest Hits. There were 20 songs this time, and at least a few of them sounded like country tunes. One of them was on the original Golden Hits from my childhood, but it was the song I always skipped in favor of the novelty tunes. This time I listened:

Two broken hearts,
Lonely, lookin' like houses
Where nobody lives.
Two people each havin' so much pride inside,
Neither side forgives.

The angry words spoken in haste,
Such a waste of two lives.
It's my belief pride is the chief cause
In the decline in the number of husbands and wives.

Maybe I knew even as a kid. There might have been a reason why I skipped that song. Pride is as good a reason as any, and Roger had that right. Other contributing factors might have included adultery, alcoholism, and mental illness. At any rate, I listened to these songs from my childhood and wondered what in the world had drawn me to them in the first place. But not “Husbands and Wives.” I love that song, and now I listen to it again and again. Next week would have been my parents’ 57th anniversary. They’re both long gone. They were both long gone even when they were alive.
Posted by Andy Whitman at 9:06 AM

I think we may have been separated at musical birth. And I even live in Ohio. Continue the good work, fine sir. Take a listen to The Big River Soundtrack if you haven't before.

OH MY GOODNESS, our parents owned the same albums! Did yours also have "The Andy Williams Christmas Album?"
Dad had lots of Roger Miller, though, and I remember the rollerskating in the buffalo herd, and singing along like a nincompoop.
Isn't it nice to know you're one of the ones who can, though?