Bottomless Pit - Blood Under the Bridge 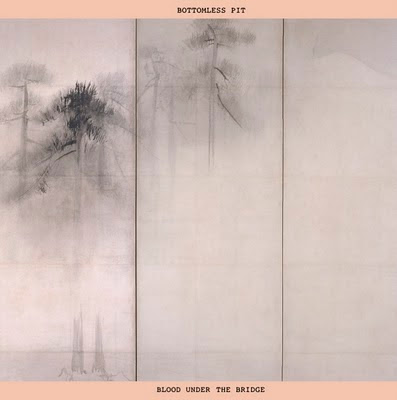 This one snuck up on me, perhaps because with that name I was expecting Norwegian death metal odes to Lucifer. But I checked out the skimpy back catalogue, and I was wrong.

Bottomless Pit emerged from the charred ruins of Silkworm, one of the better if unheralded post-grunge bands that dotted the indie landscape in the mid-to-late ‘90s. Charred ruins, in this case, is more than a dramatic metaphor. The band dissolved in 2005 when drummer Michael Dahlquist was killed when a woman intent on suicide intentionally slammed head-on into his car. The surviving band members, stunned and grief-stricken, called it quits. Founding members Andy Cohen and Tim Midgett took some time off to heal (theoretically, at least), then re-emerged as the nucleus of Bottomless Pit two years later.

And they’ve been trying to work it out ever since. The group’s debut album, 2007’s Hammer of the Gods, was a raw, open wound, a sustained howl of unresolved rage and disbelief. The new album is a little more nuanced and slightly more upbeat, but it’s hardly butterflies and rainbows. Cohen and Midgett split the songwriting and singing duties, with Cohen handling the world-weary, declamatory Lou Reed side of the equation, and Midgett rasping his way through the more blustery material. What stands out, though, is the jaw-dropping guitar work, clearly influenced by Neil Young/Crazy Horse as filtered through the slacker wankery of Malkmus, J. Mascis, and Doug Martsch. Not many bands are still working early ‘90s guitar god territory, but Cohen’s and Midgett’s intertwined leads and shards of feedback suggest that there is still plenty of life left after Pavement, Dinosaur Jr. and Built to Spill.

The songs suggest at least a tentative resolution. Winding, pensive opener “Winterwind” suggests a weary rapprochement, as Cohen resolves to consider “what it means to be careful, what it means to count.” But this is a band that has made its mark by raging against the dying of the light, and they’re not through yet. “There are so many fuckers in this world to line up and trade for you,” Midgett sings on the corrosive “Late.” There is no replacement for a unique and infinitely valuable human life. It’s that perspective that transforms Bottomless Pit into a band that truly matters, and Blood Under the Bridge into a terrific album.
Posted by Andy Whitman at 11:23 AM