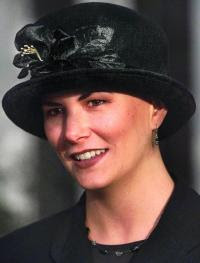 People in Columbus, Ohio are crazy. They worship muscular young men between the ages of 18 and 22. If the young men keep their noses clean and do and say the right things, they are set for life. The muscular young men may or not end up playing in the NFL. But at some point the football career ends, and that's when the real community payback starts -- the business careers, the celebrity commercial endorsements for local establishments, the inspirational speaking engagements at high schools and churches. Once a Buckeye, always a Buckeye. You bleed scarlet and gray, you keep your name out there in front of the public, and the green can be rolling in for life.

But sometimes reality intrudes. Chris Spielman was an All-American linebacker at The Ohio State University. He was an All-Pro linebacker with the NFL's Detroit Lions. Now he's a sports commentator for a local all-sports station, and a football analyst for ESPN. He lives in Upper Arlington, a suburb just west of the Ohio State campus, where he is revered as a hero.

His wife Stefanie, and the mother of their four children, died yesterday of breast cancer at the age of 42. Stefanie was first diagnosed eleven years ago, and she kept beating the odds, and the cancer kept coming back. Five times it came back, and this time it got her. During those eleven years, she spoke all over the world, sharing her hopes and her fears, openly and candidly, and she raised almost 7 million dollars for research to combat the same fucking disease that is now threatening my sister. So I feel a bit of kinship with her. And with Chris. And maybe, in some small way, with the whole city of Columbus that is grieving today.

I don't know Chris Spielman. I've never met him, although, like many people in Columbus, I feel like I know him because he's omnipresent in the community, and he's not shy about expressing either his love for Ohio State or for his wife and family. When Stefanie was first diagnosed, Chris quit playing football to be by his wife's side. Stefanie went through chemotherapy treatments and lost her hair. Chris shaved his head. He has been with her every step of the way. I'm sure, like everyone else, he has bad days, irritating personality quirks that get on peoples' nerves. But the only Chris Spielman I've ever seen is someone I deeply admire, and not because of anything he ever did on a football field.

Columbus is crazy about football. And the irony is not lost on me that Stefanie died during Michigan week, and that the news of her death is filling Columbus papers the day before the big game with the hated Michigan Wolverines. Maybe some days you bleed scarlet and grey, and other days you just bleed red. Maybe some days you can't shake that blue feeling, even if blue is a big part of Michigan's identity. Maybe this is the day that a few people in Columbus wake up to realize that some things really are bigger than football.

I don't know. I can't sort all that out. I do know that I'm praying for Chris Spielman and his kids. I can't imagine what they're going through. Tomorrow I'll probably scream and yell and bleed scarlet and grey, and do my part to cheer the Buckeyes on to victory. Today I'm thinking it's okay for me to feel blue for some people I never knew, but whose lives mean something to me anyway. Let today be Stefanie's day.
Posted by Andy Whitman at 10:10 AM

Having lost a friend to breast cancer 11 years ago...your post brought tears to my eyes. It is a f-ing disease, and I am sorry to hear that your sister is beginning her fight.

Her life was a gift.