Only a Flesh Wound: Bob Dylan as Sadistic Boxer 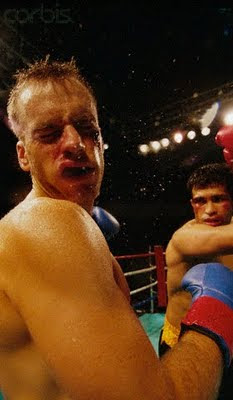 Andrew Ferguson, music critic for The Weekly Standard, throws a haymaker at the fans of Bob Dylan:

If you needed more evidence, the release this month of Bob Dylan's Christmas album, Christmas in the Heart, should close the case. Dylan fans are like Baby Huey dolls, those inflatable figures with the big red nose and the rounded bottom, weighted so that when you punch them--punch hard, punch with all your might--they bounce right back, grinning the same frozen, unchangeable grin.

We can only make a guess how Bob Dylan truly feels about his fans. But it can be a good, strong guess. He's been punching those Baby Hueys for a long time, hard.

It's not too unusual for a performer to lack respect for his most worshipful admirers; he hears himself as they do not, knowing how far short of his hopes his performance invariably falls, despite their wild applause. Sometimes an artist will even hold his audience in contempt, though he's careful, for business reasons, to keep the contempt at least thinly concealed; Abstract Expressionist painters come to mind. But not since Don Rickles at the height of his powers--the second greatest artist of the past 50 years, some believe--has a performer taken delight in actively abusing the people who pay money to enjoy his act. And when Rickles did it, the people were supposed to laugh, and did. When Dylan does it, the fans pull their chins and think hard. Then they pop right back, Baby Huey-like, and start explaining.

Most Dylan fans I know -- even the hard-core supporters -- would admit that Dylan's career has been a mixture of the sublime and the ridiculous, that he's made some 5-star albums, some 1-star albums, and a bunch somewhere in between. He is the most maddeningly inconsistent genius in the musical world. And I use that word carefully, because he is a genius. Sure, there are people who think he can do no wrong. Some of them apparently reviewed that Christmas album. But Dylan has been defying expectations and doing whatever he wants to do forever, and long before the Self Portrait debacle of the early '70s that Ferguson sees as a defining moment. You think the people at his mid-'60s electric concerts were booing because they liked what was going on? In any case, he's been written off (yes, even by well-known music critics; a little more research would be helpful) so many times that I'm sure it doesn't faze him.

I know this. He can follow up a stinker of an album with a stone-cold masterpiece. And he's fully capable of chasing "It Must Be Santa Claus" with songs of great profundity and depth. He's done it again and again. I don't think that means we have to be automatons/Baby Hueys and uncritically laud whatever the man does, so in that sense I'm sympathetic with Mr. Ferguson. I do think it means we need to give him space and grace to fail. There have been several absolute nadirs in his career, and they've now spanned close to forty years: Self Portrait, Dylan and the Dead, Knocked Out Loaded, and now Christmas in the Heart. You know what? I wouldn't bet against him next time out.

He is, by the way, contrary to Ferguson's disavowal, the greatest songwriter of the 20th century, and that has nothing to do with a nostalgic yearning for the halcyon days of yore, as the author claims. I was five years old when he made his first album, and I don't particularly relish the memory of learning how to tie my shoes. The author mentions Virgil Thompson and Cole Porter. Nice songwriters. Maybe I missed the film footage of their roles in changing western civilization. I saw what Dylan did.
Posted by Andy Whitman at 2:03 PM

Don't forget Empire Burlesque. I listened to it for the first time this week, and, for me, it's his worst because it sounds dated and that's painful.