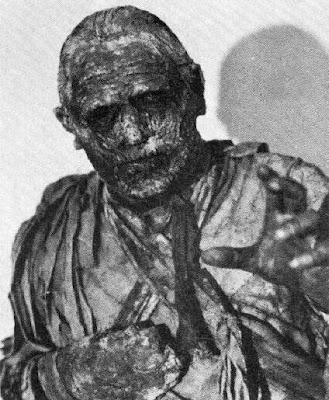 You know the guy in your neighborhood who lives for Halloween, and who wraps himself up in Ace bandages so he looks like The Mummy, and who buys a coffin for his front yard, and who lies down in his Mummy suit in the coffin, waiting for the little two-year-old kids to saunter unsuspectingly up the driveway so he can scare the crap out of them and psychologically scar them for life (thank God for diapers, eh)?

Last night I hung out with that guy. Thanks to my dad's death (is it any wonder that this kind of guy reads the obituaries?), my childhood friend David and I have reconnected. David has a house full of old monster movie posters, dinosaur models, Creature from the Black Lagoon and The Blob figurines, Star Wars parephernalia, robots, and grotesque rubber masks. I haven't really seen David since late childhood. He was, inexplicably, a nice guy, albeit a guy who certainly lives in his own little bubble of a spooky, disfigured world. He has found a way to woo a woman and sire a child, both of whom also appear to be obsessed with his interests. It takes all kinds. I was glad to see him. I think.
Posted by Andy Whitman at 12:50 PM

Those of us who have music/record obsessions have the movie "High Fidelity". For your friend (and you) I recommend "Free Enterprise". It is a little more for the Sci Fi crowd than the horror fan but it is a lot of fun.