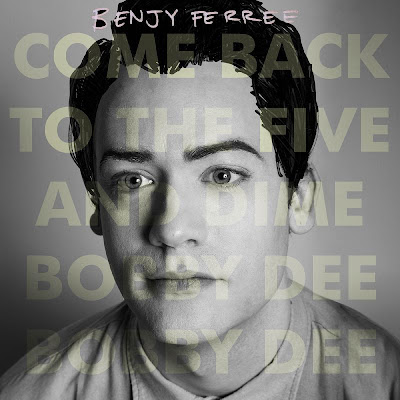 Here's a recipe for commercial suicide: write a concept album about an obscure Disney child star turned adult homeless addict, sprinkle in liberal doses of surrealistic imagery, and toss in a variety of musical influences, from the strutting glam rock of T. Rex to the multi-tracked vocal bombast of Freddie Mercury to the raw country blues of Son House. That's what D.C. singer/songwriter Benjy Ferree does on his sophomore album Come Back to the Five and Dime, Bobby Dee, Bobby Dee. Naturally, no one will know what to do with this hopelessly convoluted mashup. Naturally, it's a pretty great album.

Bobby Dee, in this case, is Bobby Driscoll, who starred in Disney's Peter Pan (among others), hit puberty, suffered a bad case of acne, was dropped by the studio, developed a nasty habit of sticking needles in his arm, and died destitute and unknown at the ripe old age of 31. Ferree tells his story in some detail, dropping obscure references to Driscoll roles and Disney plots, but he abandons the biographical ephemera long enough to get metaphysical, and that's when he's great. "Fear," the single that no one will hear, is terrific in its evocation of surrealistic existential dread, whipped up into a '50s doo-wop froth and capped by some fine Bowie glam histrionics. It's a brilliant song, the kind of thing Franz Kafka and the Dung Beetles might have sung around the oil-drum fire on some street corner in Philly. If "Fear" is the unmistakeable highlight, Ferree does himself proud on the more straightforward glam tunes, and his Marc Bolan impersonation is one of the best I've heard. It's all a little too insular and minutely focused to connect universally, but there are moments of real transcendence and beauty here. Bobby Dee is strange, quirky, and musically bracing. It's got no chance, but prove me wrong and check it out anyway.
Posted by Andy Whitman at 9:06 AM

Something about this description makes it sound like a Mr. Bungle album, but better.

Haven't got this album yet, but I have heard a track on All Songs Considered called Big Business that I think is terrific.

Of course, he's coming to Cleveland but not Columbus, like so many great new artists.