A Distinct Sense of Place 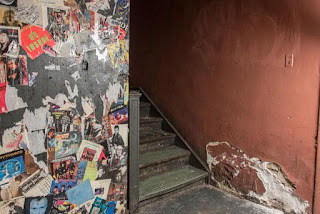 Times change. I know that. So take this as an Old Guy “Keep off my lawn” rant if it makes you feel better. But much of the six miles between my house and downtown Columbus is rapidly turning into a Disney Hometown Street, Anytown, USA. You’ll have to pardon me if I want to flee the antiseptic proceedings.

Yeah, yeah, I know. The Ohio State University, home to 63,000 students, is what looms between my house and downtown, and mom and pop are getting increasingly concerned that little Ashley and Josh might encounter something other than the comforting realities of the suburban mall once they head off to the big city. The university needed to do something about all those weird, idiosyncratic establishments where people sat around and played chess and bearded fellows declaimed poetry in darkened corners and shady record store owners raised their eyebrows and shook their heads disapprovingly whenever someone dared to bring a Justin Bieber album to the counter. Ashley and Josh were becoming increasingly uncomfortable, and we can’t have that.

So I get it. One must have Disneyland, Ohio. Most of this is the work of Campus Partners, the Official Gentrification Arm™ of the university, which takes as its ironic slogan “A Distinct Sense of Place.” Because another Starbucks or Chipotle certainly shouts “Columbus, Ohio!,” as opposed to, I don’t know, Waco or Sioux Falls or Charlotte or Salt Lake City. And sure, all those five-story, identikit apartment buildings that charge $2,500 per month probably do look marginally better than all the decrepit, rat- and cockroach-infested fratboy houses previously owned by slumlords. And, you bet, who doesn’t want a Target and four phone stores mere steps away from the identikit apartment buildings? Mom and pop will be pleased.

I, of course, mourn the old mom and pop operations that were around before the current crop of moms and pops became so concerned. I miss those places. I miss the old Greek guy who used to sling gyros at Souvlaki Palace. I miss Larry’s Bar, home of the aforementioned chess players and poets, not to mention roaming dogs and a jukebox that played Beethoven and Chuck Berry. I miss Bernie’s Bagels, home of the best basement punk shows on the planet, and where the overhead pipes dripped toxic green liquid. I miss Schoolkids Records, where the owners really were the arbiters of musical taste for countless undergrads and would-be music critics. Ohio State, like many other campuses and near off-campuses, used to offer a strange, eclectic mix of thrilling adventure and the most idiosyncratic people in the city. Now it offers another Starbucks and Chipotle. Target too. Now it’s a much more comfortable, boring place. Ashley and Josh will never know what they missed. It feels just like home.