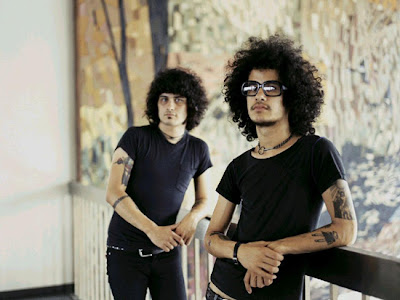 There is no excuse, really. These guys represent everything I hate about prog-metal hyperventillation. They shriek. They change time signatures about every eight seconds. They write indecipherable lyrics that might involve sci-fi themes, might involve horror themes, and might merely involve poor communication skills. It's really hard to tell. But they have decapitated heads on their album covers, and the decapitated heads emit a glowing light from the eye sockets, so I'm guessing there's a horror/sci-fi connection. God only knows.

The thing is, they're an astounding band. Every time I'm ready to write them off -- and I assure you this occurs just about every time I look at an album cover or read the song titles -- I'm stunned by the musicianship. These two guys put Rush, Yes, Frank Zappa, Santana, Return to Forever, Mahavishnu Orchestra, Metallica, Led Zeppelin, and Andres Segovia through the blender, and out comes some of the most outlandish music I've ever heard, all played at breakneck tempos. So yeah, you have to put up with some H.P. Lovecraft allusions, and titles like "Take the Veil Cerpin Taxt" and "Miranda That Ghost Just Isn't Holy Anymore C. Pisacis (Phra-Men-Ma)." Sure thing, dudes. Cedric That Title Just Bites Like Cerberus E. Pluribus (Wot-Tha-Fuk). I don't care. I love 'em anyway.
Posted by Andy Whitman at 3:02 PM

Yea, as outrageous as they are, I still adore the Mars Volta. you check them out live? ITS A MUST. I found a cool review of the gig i went to recently here http://tiny.cc/4LG1R. see them if you can.