Evolution is So Overrated 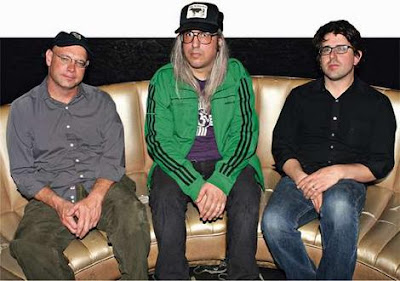 Dinosaurs are extinct because they couldn't evolve. Dinosaur Jr. is alive and well because it can't evolve. You win some and you lose some. Too bad for the stegosaurus. Two opposable thumbs up for music fans.

Stubbornly stagnating in the same late '80s scene of sweet melodies, slacker sentiments, and skronky, overdriven guitars that they pretty much inaugurated, guitarist, singer, and songwriter J. Mascis and sidekicks bassist Lou Barlow and drummer Murph just keep on bashing out the same old same old. After a nineteen-year hiatus, the original trio re-united in 2007 with Beyond, and followed that up with the stellar and non-odious Farm, released earlier this year.

It's good to have you back, guys. And it's like you never left. Mascis is a ridiculously great guitarist, a hyperkinetic Neil Young who revels in the ragged glory and the grunge, but who can also race up and down the fretboard. He makes me want to jump on the couch cushions and play air guitar, a prospect that ought to have my wife and daughters concerned. And Lou and Murph are rock solid in their support roles, and Lou's softer, more introspective songs are the perfect foil for J.'s hypercharged antics. But what is most astounding is that after some significant and lengthy detours -- Mascis with the revamped Dinosaur Jr. and The Fog, Lou with Sebadoh, Murph God only knows where -- they are so easily able to recapture the synergy that made them such a thrilling, formidable band in the first place.

For old hippie dinosaurs like me (alas, still roaming the earth), weaned on Clapton and Hendrix and Page, and wholeheartedly sick of the mopey synth bands that dominated the early-to-mid '80s, J. Mascis was and is a revelation, the guy who connected the dots between the pantheon of the '60s/'70s guitar gods and the latter-day deities such as Kurt Cobain, Thurston Moore and Lee Ranaldo in Sonic Youth, Kevin Shields in My Bloody Valentine, and Joey Santiago in The Pixies. Those early Dino Jr. albums -- most notably You're Living All Over Me, Bug, and Green Mind -- were almost perfect distillations of slackerdom, but I never quite believed the ambivalent sentiments, either. Slackers didn't play guitar like that, like there was a real urgency in their getting off the couch, like they were on fire. But that's how J. Mascis played.

And so it's been a surprise and a delight to discover the same elements at work in the last two albums from the reunited band. They're older. I don't know if they're wiser. But if they've changed, they haven't changed the music much; maybe a little clearer production, that's all. Otherwise, the rhythm section locks in, and J. lets it rip. It sounds fabulous. It rocks. Across several musical epochs, dinosaurs still roam the earth.
Posted by Andy Whitman at 9:39 AM