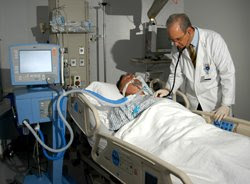 I know the economy is melting down, and that eventually I'm going to need to turn my attention to the fact that I now have a lot less money in the bank, and that I may not be employed much longer. But for the time being I'm content to focus on my father, The Man Who Would Not Die.

He was supposed to die Tuesday evening, after we took him off life support. He didn’t. He’s still ticking, although there’s no evidence of brain activity, and his body shows an alarming tendency to twitch spasmodically. We taped his eyes shut because it was too spooky to watch them roll around in his head. And so we’ve waited. My sister Libby, her waiting time now up, will fly back home to California today. My Columbus sister Cathy and I are headed back to work. We figured we’d have him buried by now.

We had a good week anyway. We laughed a lot, and cried a little. We spent time with funeral home staff members, lawyers, doctors, and nurses, but we still had a lot of time left over to reminisce, to compare memories and to try to make some sense out of the chaos of a home that featured an alcoholic, crazy mother and a philandering, adulterous father who would grab his car keys and drive away whenever the butcher knives appeared, my mother’s weapon of choice to torment the kids. He ran away from us all his life. Now he can’t run anymore.

He’s left behind a mess. His estate, such as it is, was left to a former roommate who is now dead. His latest will, which was supposed to designate my Columbus sister Cathy as the recipient of his home, was never signed, and so the good State of Ohio gets to figure it all out. My dad’s house apparently goes to the estate of the former roommate. Whoopee. I’m washing my hands of the whole affair, even though technically I’ve been named as the executor of his will. It’s what I told him I would do, and would not do when he told me he was leaving the house to his roommate. I refuse to execute injustice, at least if I can help it.

My dad was not the kind of man with whom most sane, healthy people would want to spend time. He was mean-spirited, abusive, self-centered, and couldn’t remember what I did for a living or the names of my daughters. He remembered the name of my wife, Kate, because she looked good and belonged to the right gender. He took all his retirement savings and used it to buy love. It didn’t work. The various exotic dancers and prostitutes who spent time with him over the last twenty years of his life were happy to take his money, but left him as soon as the money was gone. He lived profoundly alone, except for periodic visits from my sister Cathy, who is more kind than I am, and who endured his abuse and cooked and cleaned for him. She is now being denied any part of his estate for her troubles.

He tried, early on, to be a good dad. I have positive memories as well, more than my younger sisters do, in fact. He spent summer and fall evenings tossing baseballs and footballs with me. He taught me how to play chess. He helped me with my homework. And he’s gone missing for the last forty years of my life, even though we’ve mostly lived in the same town. His primary pursuits have been women and gambling, in that order. He’s lost at both. We’ve kept up the pretense of family to some extent. Once a year he has come to our house, eaten Christmas dinner with us, opened our presents, and gone back home. He doesn’t want to be there. Some years he’s brought exotic dancers along, and seventeen Christmas presents, all for the exotic dancers.

I’m thankful for the good, early days. I’m saddened for the person he became. I said my goodbyes to him last week. Now he lies in a hospital bed in a vegetative state, a husk of a dirty old man. This is who he is, or was. I pray for God’s mercy. The hospice workers call me, a hint of judgment in their voices. They don’t ask me what I know they want to ask me: why aren’t you here? I’m not there because there’s no one there. There hasn’t been anyone there since my dad was without oxygen for several minutes after his heart attack more than a week ago. There hasn’t been anyone there for almost forty years. But I pray for God’s mercy. It’s what my dad needs. It’s what I need, too.

My father could use a little mercy now
The fruits of his labor
Fall and rot slowly on the ground
His work is almost over
It won't be long and he won't be around
I love my father, and he could use some mercy now

My brother could use a little mercy now
He's a stranger to freedom
He's shackled to his fears and doubts
The pain that he lives in is
Almost more than living will allow
I love my bother, and he could use some mercy now

My church and my country could use a little mercy now
As they sink into a poisoned pit
That's going to take forever to climb out
They carry the weight of the faithful
Who follow them down
I love my church and country, and they could use some mercy now

Every living thing could use a little mercy now
Only the hand of grace can end the race
Towards another mushroom cloud
People in power, well
They'll do anything to keep their crown
I love life, and life itself could use some mercy now

this is life before it gets photoshopped all to death.

hard to look at, but don't stop looking.

Andy, we've talked about your relationship to your dad before, and as you know, I consider you far more merciful and forgiving than I think I could be in this instance. The guilt you may feel is completely false. You've made all the efforts to have a relationship with someone most of us wouldn't consider worthy, even with the familial tie. We both know that God can even love someone like him, and that same God certainly understands any difficulty you may have with loving and forgiving such a father. My prayer is that you and your family can put this all behind you quickly.

Thanks for sharing. You are brave. I wish you could have had the kind of father you deserved.

I'm glad you're blogging about this. I believe that one must go through, not past these sorts of things. Grapple with this beast, but don't do it alone.

Mercy of The Wheels - John Gorka

Everyone has a story. Maybe they all end with kyrie eleison.

We don't know what goes on in the spiritual realm during these times. God is not passive. May He be with you and your family, including your father.

Andy, Mary's "Mercy Now" works on so many levels, in so many circumstances. It is indeed, a beautiful choice of lyrics by an incredible songwriter. I continue to think and pray about you.

Thank you for this post, for being so transparent about your Dad. I grew up with a schizophrenic, alcoholic Dad who slept with a machete under his pillow, almost ran my mom over with me in the car when he was drunk once and who swore I was the antichrist...among other things.

I guess I write all that to say that I can somehow relate to what you've written and it's strangely comforting to read about people who grow up in unconscionable conditions and make it out, by the grace of God.

Praying for you and your family...

In the world's mighty gallery of pictures...
Hang the scenes that are painted from life.
There's pictures of love and of passion...
And there's pictures of peace and of strife.
There hang pictures of youth and of beauty,
Of old age, and the blushing young bride,
They all hang on the wall,
But the saddest of all,
Are the pictures from life's other side.

I'm thinking of you, brother.