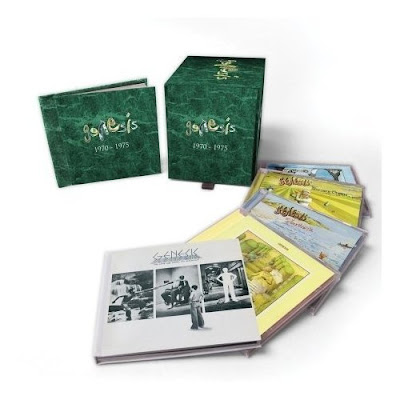 So this is it, the Mother of All Prog Box Sets, the one that will send the snarling punks scurrying to buy mellotrons and shimmering wizard robes. The bare details: 7 remastered CDs, 6 DVDs, and a book. Skipping the forgettable Genesis debut album From Genesis to Revelation, this box chronicles the Peter Gabriel years, and the Peter Gabriel albums: Trespass, Nursery Cryme, Foxtrot, Selling England by the Pound, and the 2-disc The Lamb Lies Down on Broadway, and adds a seventh disc of previously unreleased rarities and outtakes. It presents five video hours of the band in 2007 Boring Old Fart Mode, sitting around the studio and chewing the fat about the grand, weird days. And it features more than three fabulous hours of concert footage from the early ‘70s, the days when Gabriel wore winged bat headgear, was frequently engulfed in a wart-covered amorphous blob costume, and could occasionally be found on stage with mixed fruit on his head. The fact that these comic and nightmare visions could be seen on The Midnight Special, an early ‘70s music revue that usually featured the likes of Helen Reddy and Tony Orlando and Dawn, is all the more delightful.

First, the bad news: Trespass still isn’t very good, and except for the rousing closing track “The Knife” continues to sound like an awkward, uncertain band in search of its identity. Furthermore, the 2007 Old Fart video footage is overkill, and will only appeal to the most obsessive completists who long to know the minutiae of the band’s recording history. The good news: Genesis became a very good band very quickly, and everything else in this set is as good as this genre ever gets.

Nursery Cryme (1971) and Foxtrot (1972) laid out the basic template: complex, multi-part musical suites driven by Tony Banks’ keyboards and Gabriel’s theatrical, impressionistic songwriting. Unlike contemporaries Yes and Emerson, Lake, and Palmer, Genesis never really pursued a souped-up approach to classical music, and the prodigious instrumental technique was never an end in itself, but was always used in service to the songs. And the songs themselves were wondrous and weird; tales of childhood oppression, murder, ghostly apparitions, suicide, and, in the 23-minute “Supper’s Ready,” nothing less than the apocalypse and the end of life on Planet Earth. It’s not all grisly mayhem, though. There’s a peculiarly English (and sometimes merely peculiar) sense of whimsy that pervades these songs and that lightens the otherwise dystopian worldview. Gabriel presides over the madness, his evocative voice sounding ancient and craggy even while still in his twenties.

Selling England By The Pound (1973) and The Lamb Lies Down On Broadway (1974) are the twin pinnacles of the Prog Rock genre. The former is a sometimes pastoral, sometimes raging amalgam of offbeat humor and literary allusions, as quintessentially British as Monty Python, weird as hell and utterly captivating. The latter, a 2-disc set, is a supposed concept album with a concept so impenetrable that it’s best to forget the whole narrative line and simply concentrate on the wonders of the music. And the music is the best Genesis ever produced; slyly quoting The Drifters, of all people, on the title track, surging menacingly on “In the Cage,” floating as gently as a lullaby on “Carpet Crawlers,” and imploding on itself on the entire, nightmarish second disc. This is Genesis at the peak of its powers, and it’s no wonder that Gabriel left after this album. There was nowhere else to go.

That messy departure – the stuff of legend to Genesis fans – has been the source of unending debate for more than thirty years now. Genesis Mach II, with Phil Collins firmly at the controls, went on to record arguably better and inarguably more popular music during the late ‘70s through the ‘80s. Peter Gabriel went on to an equally impressive solo career. I’m content to call it a draw, and to admit that Gabriel made wildly inventive music, and that Collins created some of the best pop music of the era. But this box set is supremely impressive, and is among the best box sets ever released in terms of both the quality of the original material and the scope of the video and musical extras. For those who stubbornly cling to the belief that musical virtuosity is not a crime, and who still hold to the silly notion that guys with mellotrons and flutes can actually rock, Genesis 1970 – 1975 is an affirmation of all that was good and great about those silly wizard robes.
Posted by Andy Whitman at 11:00 AM