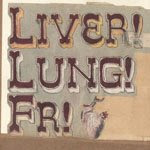 Don't drive on the sidewalk. It's a commonly understood traffic rule that can get you arrested if you violate it. My father found it out the hard way less than a year ago when he tried to pick up a prostitute. Do your propositioning from the street. And it's a hard truth that Frightened Rabbit frontman Scott Hutchison seemingly understands all too well. Like the great John Updike short story "Transaction," a clinical and dispassionate account of a loveless sexual encounter, Hutchison's songs plumb the depths of love as the mere exchange of bodily fluids. And unlike John Updike, he can really sing.

Frightened Rabbit have a brand new live album called Liver! Lung! FR!. It's apparently a Scots thing. I find the album name as inscrutable and as mildly irritating as the name of the band itself. It's essentially The Midnight Organ Fight album minus the electric guitars and a couple of the short song interludes. And that's both good news and bad news. Minus the anthemic, arena-shaking crescendos (quite possibly the best I've heard since the first few U2 albums), these songs are forced to stand on Hutchison's mournful brogue and acoustic folk bluster. And they stand just fine because they are great songs, and because The Midnight Organ Fight is easily one of the best albums released this year. Stripped to their basic components, Hutchison's songs come alive in new and surprising ways. Jesus is just a Spanish boy's name/How come one man got so much fame? sounds not so much like irreverent smartass protest as the cry of a lonely man who wouldn't mind finding something more substantial upon which to stake a life.

There's disease and dis-ease, self-loathing and hollowness and sham promise everywhere in these songs. "The Modern Leper" finds Hutchison comparing himself to an untouchable, not because of physical symptoms, but because of his grotesque heart:

A cripple walks among you all, you tired human beings
He's got all the things a cripple has not, working arms and legs

"Keep Yourself Warm," a song that drops the F bomb no less than twenty times, ought to be required listening in church marital counseling sessions:

I'm drunk, I'm drunk, and you're probably on pills
When we both have the same diseases it's irrelevant, girl
Do you really think you'll find love in a hole?
It takes more than fucking someone to keep yourself warm

Most revelatory of all is "The Twist," not the classic Chubby Checker tune, which ratchets up the self-loathing and desperation to near unbearable levels:

Twist and whisper the wrong name
I don't care and nor do my ears
Twist yourself around me
I need company, I need human heat
Let's pretend I'm attractive and then you won't mind
We can twist for a while
It's the night, I can be who you like
And I'll quietly leave before it gets light

Okay, maybe the Sunday School class might not appreciate it. But there's profound truth there, and an ache that is palpable. Songwriters are rarely so vulnerable, or so transparently disarming. The Midnight Organ Fight is an album about fighting for hope and human connection in the midst of a world obsessed with hollow image. Stripped to its bare essentials, Liver! Lung! FR! explores those same themes with even more stark results, and shows that Frightened Rabbit can transfer the studio magic to the stage. They display every evidence of being a terrific live band. I'll let you know. I'm seeing them in Columbus tonight.
Posted by Andy Whitman at 10:20 AM

John, the concert is at Skully's (N. High just south of 5th Ave.). I don't see a starting time, but I'm guessing about 9:00. There are three bands -- Tin Armor (I'm assuming they're the opener, and I know nothing about them), Spinto Band (good, frenetic Bowie-like indie rock), and Frightened Rabbit. I don't know if FR is playing second or third, but since Spinto Band is worth seeing in their own right, I'll be happy either way. Tickets are $8 in advance, $10 at the door.

how was the show?