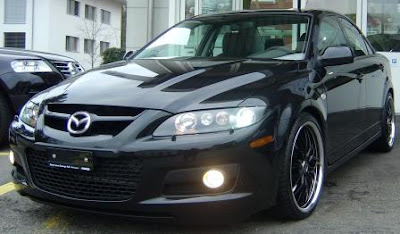 I am not a gearhead. I always consider myself fortunate whenever I'm able to pour the coolant into the car and it winds up in the right compartment, and not where the oil is supposed to go. Just last week, in fact, I managed to pour the coolant into the correct receptable, but failed to attach the rod that props up the hood into its Proper Slot(TM) when I was finished, and thereby jammed the hood into a permanently semi-open position where it could neither be opened nor closed.

Still, I've had two car geek experiences in the past week that have left me feeling warm and automotively competent.

The old semi-reliable minivan finally broke down permanently (that the hood could never be opened again was somewhat of a factor) after ten years and 150,000 miles, so we bought a new Mazda 6 on Thursday. It looks like the one pictured, right down to the color. It's billed as "sporty family sedan," which sounds like an oxymoron, and probably is, but it's kind of fun to be in a car that goes from 0 to 60 in under two minutes. We bought it at the Ricart Auto Mall, a legendary local institution that consists of a dozen or more car dealerships, all owned by Fred Ricart, and which stretches for about a mile in every direction. There were cars, and nothin' but cars, as far as the eye could see. Now, the coolest thing about the Ricart Auto Mall is that it has its own Test Track. One doesn't take one's prospective new car out for a test drive on the local roads. No sir. One takes it to the Ricart Test Track.

So we did. First, the negatives: I was really hoping that they would issue me a helmet. Nope. That didn't happen. Second, the straightaway was just too short to really push that new prospective auto, and I was hoping to open it up to, say, at least 120 MPH. Nope. So I revved it up to maybe 45 MPH. The positives: those orange cones. I was zigging and zagging, cornering and maneuvering like a seasoned pro. And the orange barrels were positioned just perfectly, and posed significant driving hazards. You smack that new car into an orange cone, and it's no big deal. But you smash into one of those orange barrels and you severely dent a car you don't own yet and probably incur the wrath of Fred Ricart. I was sweating profusely, but I managed to avoid collisions while still squealing the tires. It was great fun.

So that was one gearhead adventure. The second occurred yesterday, following the memorial service for my dad. My cousin Mike was in town, and Mike is a serious gearhead. He owns a semi-fleet of rebuilt and refurbished classic Porsches from the 1950s and 1960s. So Mike and I talked Porsches. "Do you prefer the 911 to the 914?," I asked him, and "Is there a better mid-engine roadster than the Boxster?" I could tell he was impressed. Here was a side to his bookish, nerdlike cousin he had never seen before. So he enthusiastically told me his many and varied opinions about classic Porsches.

I didn't have the heart to tell him that I know these things because of Need for Speed: Porsche Unleashed, a video game that allows me to race virtual Porsches along the French Riviera and over the Pyrenees. That game has caused some problems for me, particularly in the transference of virtual driving skills to real-world driving skills, such as when I've tried to take a corner in the minivan on two wheels. But I didn't tell him. I played along. And I think I went up a notch or two in his estimation.

In any event, I'm feeling greasy and savvy and ready for the open road. We have a lot of orange barrels on actual highways in Columbus. Unfortunately, they typically limit the speed at which one can travel to about 10 MPH.
Posted by Andy Whitman at 9:37 AM

You may think that sporty and sedan don't go together, but I'd direct you to a BMW 3-series and say point proved. Or a Cadillac CTS.

At any rate, this 21 year old is envious of your purchase.

i second the envy notion. :)

congrats on your new car! i love mazdas.

Scott, we purchased the Mazda 6 i Sport edition, which is next level up from the base model. It's got power everything and cruise control, but doesn't have the heated leather seats, the "Blind Spot" computer chip on the outside windows (which would have been nice, but not several thousand dollars nice), the Bose audio system, etc.

Still very nice Andy. I'm in agreement with you about multiple-thousand dollar computer chips for things like blind spots. It's a wonder how civilization has survived without them til' now :)