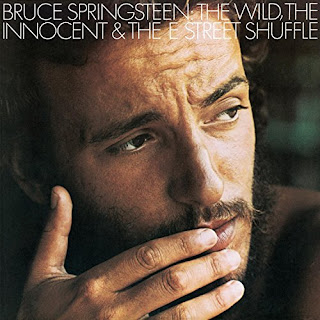 “Let us now praise famous men, and our fathers that begat us.”
- Ecclesiasticus 44:1

Incredibly, Bruce Springsteen will be 70 years old in a few months, far past the age when rock-star moves are seemly or appropriate. I’ve been hanging with him (virtually, of course), for 45 of those years, which makes me little more than an old fart. Still, I would have to say that I’m a loyal old fart. I’ve hung with him through some of the greatest music of the past half century, and, occasionally, some of the most banal and derivative, particularly when Springsteen could do little more than offer painful Bruce Springsteen imitations.

But here’s the point where I knew he was destined for greatness. Bruce Springsteen was 23 years old when he wrote this song and the others that appeared on his second album “The Wild, the Innocent, and the E Street Shuffle.” By 1973 he had graduated from the bars on the Jersey Shore to places like Max’s Kansas City in Greenwich Village and My Father’s Place on Long Island, and he fancied himself as the quintessential boho poet. The early comparisons to Bob Dylan were surely no accident.

Still, nobody was really buying his records. It would be a couple more years before rock critic Jon Landau pronounced him the future of rock ‘n roll and Time and Newsweek both featured him on their covers during the same October week in 1975. At that point he would be unstoppable.

But here he is; the genius in full flower in 1973. He’s still a Jersey kid and a transplanted New Yorker at this point, but he wants to get out of Jersey and New York because they’re too small for him. And he’s already saying his farewells. “For me, this boardwalk life is through,” he confesses on one of the tunes, and on this one he sums it all up, the glory and the mess, in a wildly eccentric and eclectic elegy. You want blues, jazz, folk, gospel, a little Wagnerian sturm und drang? You get all that in “New York City Serenade.” Oh, the band is pretty great, too, and although Bruce would swap out a few of these folks before he settled on the classic E Street Band lineup, I’m not sure that he ever had a more sympathetic group of players than he had here.