Every Picture Tells a Story 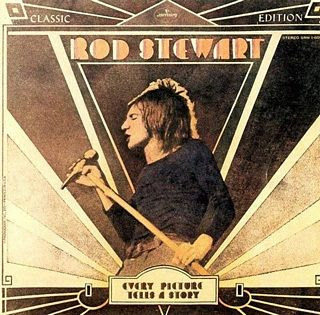 Forty years ago this week Every Picture Tells a Story arrived on American shores. It was Rod Stewart’s third solo album, but nobody was really counting at the time. That’s because Rod Stewart was everywhere in 1971, and his albums with his superb band Faces were rivaling those of The Rolling Stones as the best that rock ‘n roll could offer.

For anyone who knows Rod Stewart only from his cheesy pop ballads (“Tonight’s the Night,” “Do Ya Think I’m Sexy?”) and his incessantly bland covers of the songs of Cole Porter, Irving Berlin, and George Gershwin, it may come as something of a shock to know that at one point he was the greatest rock ‘n roll singer in the world. But he was. He proved it on this album, where he took a bunch of old and decidedly placid folk, country, and R&B songs, and simply rocked the shit out of them. The fact that he did this with fiddles, pedal steel, acoustic guitars, and mandolins as lead instruments (and, okay, the world’s most primitive drummer in Micky Waller) is all the more remarkable.

There are a few exemplary Stewart originals here – “Mandolin Wind,” the title track, and, of course, “Maggie May.” But it’s the covers that still astound me. Whether obscure (Ted Anderson, anyone?) or blazingly obvious (Bob Dylan, Elvis, The Temptations), Rod’s covers on this album remain the definitive versions of these songs. There are eight songs here, spread out over about forty-five minutes. Okay, so Rod had yet to figure out how to write a catchy three-minute single (and I, for one, am never going to forgive him “Do Ya Think I’m Sexy?,” in spite of its admirable brevity). So he left a lot of room for the band to jam. Good thing, too, or we would have never heard Ronnie Wood’s finest six minutes as a guitarist on the title track, or Lindisfarne’s Ray Jackson play those poignant mandolin codas on “Maggie May” or “Mandolin Wind.” What we have here is as close to a perfect album as the seventies produced. If you’ve never heard it, do yourself a favor and discover one of the classics.
Posted by Andy Whitman at 11:34 AM

This album blew me away when it came out. Well, first, "Maggie May" blew me away before I heard the album. But it just got better. Fine, fine rock and roll.
Recently I found myself deprecating this album. Then I heard a cut off it and wondered why. And I realized that it had simply been too long since I'd heard anything from it, and I'd subconsciously lumped all of Rod's work that wasn't labeled "Small Faces" in as if it were his later crap. While the style is different, he basically turned into Englebert Humperdinck or some other space alien who can't sing rock to save his life. And yeah, "Do Ya Think I'm Sexy" should be taken out back and shot, then burned at the stake, then drowned, drawn and quartered, keelhauled, resurrected and shot again for good measure.

Bought this album way back when I heard "Reason to Believe" on the radio. One of the all time great albums. Don't believe I ever bought another one of his albums. Maybe a lot of people did that, and maybe that's why he decided that crap pays better.

Even today, as a middle aged suburban dad, hearing this album makes me walk a little taller. I agree 1000% with every word you have written. The post 1976 Rod(I'm even OK with A Night on the Town) actually hurts my feelings.