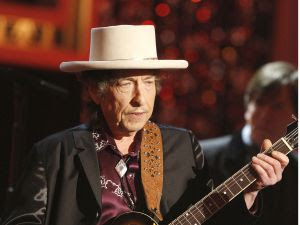 So it’s been five years since I did this. And now Bob Dylan is 70, an unseemly age at which rock ‘n rollers need to seriously consider a future involving adult diapers and pureed food. “How terribly strange to be 70,” Paul Simon once sang, and he was right. He’s only got a couple months to go now, too. You keep waking up in the morning, and before you know it, it happens.

In the intervening five years Bob Dylan has, with characteristic implausibility, released a lot of music. Some of it is old (the historic Newport Folk Festival recordings from ’63 to ’65, the superb collection of outtakes and alternate song versions called Tell Tale Signs, the oft-bootlegged Witmark Demos, and a ’63 concert recording from Brandeis University). Some of it is new (the ridiculously great Modern Times, the mediocre Together Through Life, and the merely ridiculous Christmas in the Heart).

He’s kind of set in his ways now, so you get the feeling that the utter unpredictability of the man and his work is probably not going to change. He is, without a doubt, the greatest songwriter and the single greatest presence in the history of what could loosely be construed as rock ‘n roll. But the fact is that rock ‘n roll has never been big enough to encompass what this man does, which ranges from Delta blues to hallucinatory poetry to honky-tonk jukebox anthems to gentle folk to schmaltzy MOR, complete with sappy strings and heavenly host choir accompaniment. And that’s just in the last five years.

At some point he will probably stop making music. But he’ll go out with his boots on and his harmonica rack strapped to his guitar, and the Neverending Tour will have to be cancelled due to unforeseen circumstances. I hope that’s a long, long way off. Happy birthday, Bob. His biography at All Music Guide starts off with “Bob Dylan’s influence on popular music is incalculable.” That’s correct, and I won’t even begin to try to tote it up. But I’ll still marvel at what the man has done, and is doing. He won’t care about that, or about anything else written or said about him. He will go on being Bob Dylan. I suspect that’s part of the reason why we love him.
Posted by Andy Whitman at 10:14 AM