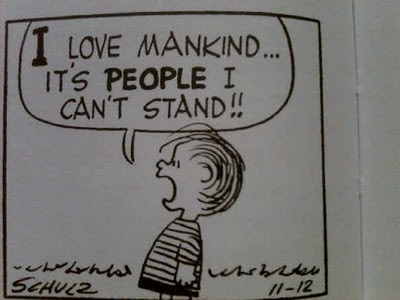 So, I wrote an article about Mavis Staples, one of the most amazing human beings I've ever encountered. This is a woman who oozes compassion, who has been instrumental in bringing about needed social change in the Civil Rights movement, and who treated me with nothing but kindness and respect during our recent conversation. You know what people who comment on the article want to talk about? How Mavis was flirting with an interviewer during Sunday's Grammy Awards.

Why, oh why, must Christians be such judgmental assholes? I know, I'm doing it too, right now. But you know what? Sometimes Christians are judgmental assholes. I'd like to slap some of them. If they turn the other cheek, I'll slap that one, too. Then I'll repent. But not until I get in two good slaps.
Posted by Andy Whitman at 12:25 PM

Wow - agreed. Everytime I see or hear Mavis Staples, the feeling that everything is going to be okay starts radiating out from my core. I don't know if any other artist or public figure has quite that exact effect on me. Something about that woman just makes your soul feel good.
I've been looking forward to your piece with her for awhile, Andy. Thanks.

At the very least they need to get a life. And get over themselves.

I know what you mean Andy. The most important thing is winning people for Christ. A woman who can sing and serve in a way that causes people to to take notice of my savior is for rejoicing. I have been listening to Jamey Johnson and it is some of the most heartfelt poetry I have heard in a long time. He is baring his soul for all the world to see. I am sure some Christian somewhere is saying but he sure drinks and smokes a lot. It just pisses me off.

He who is without sin...

If I had a rocket launcher...