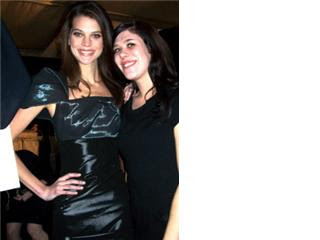 My daughter Katryn, currently studying fashion merchandising in NYC, has an amazing internship with a woman named Nicole Miller, who is apparently a hotshot fashion designer. Nicole has her doing basic scutwork for no money, but that's okay because this is one of those rites of passage that people in her field have to go through before they can land a real job. But there's been fun, too. For the past two weekends Katryn has worked behind the scenes at a couple big fashion shows and trade shows. Part of her role has been to work with a team of Nicole Miller drones who undress/dress the models when they come off the runway. They usually have about thirty seconds to get it done. It's kind of like being on the pit crew at a Nascar race, except you're changing Joan-of-Arc-themed evening gowns instead of tires.

I've been reveling in Katryn's stories of the models, who are all about 6'3", weigh 107 pounds, and have single names like Moldavia and Mischa. The devil apparently wears both Prada and Nicole Miller. The upside is that unlike the normal scutwork, Katryn has been paid for working the fashion shows. In Nicole Miller dresses. If she could sell them, she'd be making more money than me. But, of course, being the fashionista that she is, she doesn't want to sell them. She wants to wear them. Me? I'm thrilled for her. I just wish she could wear the bills we're racking up as well.
Here she is with Alexandra. Or maybe it's Mischa.
Posted by Andy Whitman at 9:36 AM

All right, Katryn. I know her parents are proud of her, and so are some aunts and uncles and cousins.

NYC, concrete jungle or land of opportunity? Answer: both.

Great things happen in this city because they can. May this be the first of many surreal moments in Katryn's life.